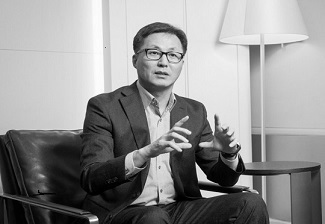 [Column] Hark-sang Kim: What will the next phase of smartphone innovation bring?

In light of modest global sales recently, some observers say that smartphone innovation has hit a bottleneck, as new devices bear more iterative upgrades instead of groundbreaking features. Others even predict that the smartphone era may be coming to an end soon.

But with mobile technologies like 5G, AI, and AR maturing rapidly, users will be able to do even more with their smartphones soon. Instead of losing relevance, the next wave of technological innovation will make the smartphone more central to our lives than ever before. Whether it’s leveraging increased connectivity or harnessing next-generation mobile intelligence, a larger display will be key to accessing future smartphone experiences.

Despite current trends, we are still living in a world where the size of the smartphone display can only be as large as the device itself. At Samsung, we began to ask ourselves how we can overcome this limitation and expand the possibilities of what users can accomplish on the go.

The Shape of Things to Come

Smartphone displays can’t get any larger without compromising portability – this was the orthodoxy for a long time.

Instead of accepting the status quo, resolving the contradiction between screen size and portability and developing a new form factor became the central focus of our innovation efforts.

The recent unveiling of the Infinity Flex Display at SDC 2018 signaled the start of this new chapter. But building a foldable device was no mean feat. After the prototypes of the flexible display debuted at CES in 2011, it took another seven years to perfect the technology and deliver a truly meaningful experience to users. From developing new materials to overcoming mechanical challenges, the foldable screen demanded a total reconfiguration of the smartphone from inside out.

Preparing for the New Era

We expect to see a sea change in the smartphone form factor in the coming years. From rollable and stretchable devices to the devices that can fold in multiple ways are no longer beyond the realms of reality. Samsung is ready to usher in this future and create meaningful experiences for consumers that help them do more of what they love.

To build the new foldable device, we made significant investments to create a new material that completely changes the anatomy of the smartphone display. We also created a natural and durable folding experience that users can appreciate from the very first time they unfold the device and crafted an innovative mechanical technology that can withstand hundreds of thousands of folds. We also had to rethink the placements of the battery, cooling system, and camera so that they can be placed inside the slim body efficiently. Last but not least, we developed an intuitive UX to ensure apps can transition seamlessly between the smaller and larger displays. We are committed to continue pushing the limits of possibility and lead the mobile industry into a new era.

Smartphone innovation is at the cusp of the next major transformation. The arrival of the Infinity Flex Display is just the beginning. We will continue pushing the limits of possibility and shape the future as it unfolds.

[Column] Hyther Nizam: Why collaboration tools are critical for organisations in the age of the hybrid workplace

The workplace today is vastly different than it was a few years ago. The pandemic has accelerated the adoption of digital technologies by businesses… read full column here.

As the African fintech industry continues to bloom, so does the funding. Flutterwave, the San Francisco-headquartered and Lagos-based company that ...read full column here

This week, lawyers across Africa commented on the continent’s urgent need for data privacy and security laws among other top stories of the week. ...read full column here