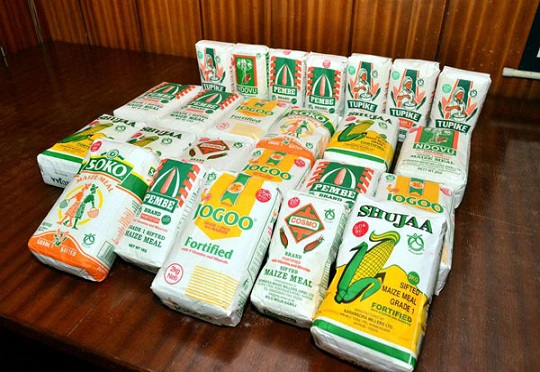 Maize flour prices in Kenya have dipped to a six-year low on increased supply of cheap grains from Uganda and harvests in western region, easing inflationary pressure.

The imports from Uganda and harvest has pulled down grain costs from Ksh3, 200 ($29) a bag in January to below Ksh2, 000 ($19) offering millers room to cut costs for consumers.

Kenya has received about 5 million bags of maize to plug a deficit and curb a rise in flour prices.

All brands of maize flour with the exception of Jogoo are now trading at less than Ksh90 ($0.85) in the retail outlets, coming as a relief to consumers.

“There is sufficient maize in the country at the moment and we expect this to stabilise the price of flour,” said the Director of Crops in the Ministry of Agriculture Johnson Irungu.

The supply of grain has improved following the onset of harvesting of short season crop from some parts of the country.

Maize deficit last year increased the cost of the two-kilogramme packet of flour to a high of Ksh153 ($1.52).

This prompted the Ksh6 billion ($60 million) subsidy on maize imports in May last year to help lower the cost of flour, which had risen due to drought and poor planning.

The subsidy lowered the cost of a packet of flour to Ksh90 and was withdrawn in December sparking a rally in the cost of the staple to Ksh115 ($1.14).

The reduction will ease pressure on inflation, which rose to 4.35 per cent last month, from 4.25 per cent a month earlier, pushed by a rise in some food prices and petrol costs.

According to Eastern Africa Grain Council, the supply of maize in the market will be sustained to the end of the year as Uganda and Tanzania are now harvesting with Kenya’s main crop expected to hit the market starting October.

The neighbouring countries play a key role in bridging local deficit through cross-border trade. Under the East African Community customs union, goods are supposed to flow freely between member states.