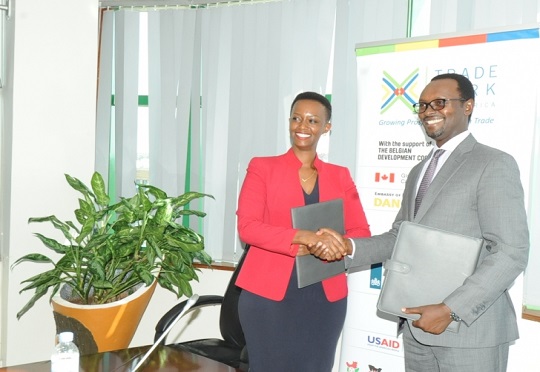 The Embassy of Ireland’s grant to TradeMark East Africa complements its investment, announced in September, of an additional $3.15 million to improve income opportunities within Tanzania’s agriculture sector.

“Over the past 50 years, Ireland has evolved from being a relatively closed economy to one of the most open economies in the world. This experience has transformed our country beyond recognition. As a small open economy, trade and investment have become fundamental to achieving sustainable growth in Ireland and quality jobs for all our citizens.” he said adding that increased trade is a powerful means by which to stimulate economic growth and job creation in Tanzania and it will need to be a central priority if Tanzania is to achieve its target of becoming a middle-income country by 2025.

TMEA which is embarking on its new strategy covering the period 2017-2023. Strategy 2 offers large-scale transformative impact, building on gains made to date but recognising the substantial potential gains that can still be made. This Strategy will contribute to an impact of US$0.6 billion of additional trade in East Africa. This will, in turn, contribute to sustainable, inclusive prosperity by adding US$4.7 billion to the region’s GDP, creating and sustaining more than 0.7 million additional jobs, lifting more than 1.8 million people out of poverty, generating an additional U$1.1 billion of tax revenue, and creating over US$0.64 billion of additional economic welfare gains for the region.

TradeMark Tanzania Country Director John Ulanga added the support to TradeMark East Africa (TMEA) Tanzania is expected to improve its trade competitiveness and increase its profile as an investment destination within the East African Community.

“The Irish government is an important partner in promoting regional and economic integration in East Africa. TradeMark East Africa will continue to focus its efforts on increasing trade and prosperity in East Africa, primarily through investing where there will be the biggest impact for East Africa’s people and the private sector. Facilitating regional trade is an effective means to alleviate poverty.  This investment in supporting these projects is the catalyst needed to bring prosperity to the region, and Tanzania specifically” said John Ulanga.