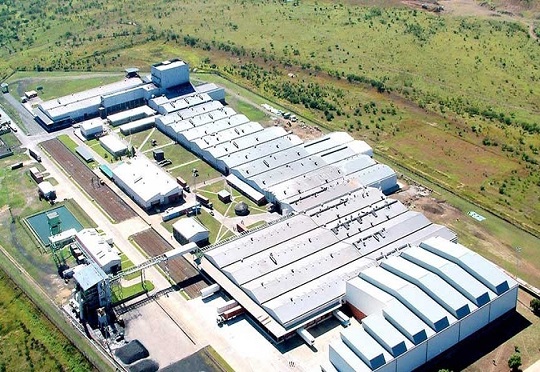 This second phase of SRSA’s multi-billion-rand investment to upgrade and modernise the plant’s capacity saw a further injection of R970 million to introduce and manufacture truck and bus tyres locally, bringing the total investment into the Ladysmith facility since 2014 to more than R2 billion.

VIP guests, stakeholders and dignitaries were given an opportunity to tour the world-class TBR factory. They included government and industry representatives together with President and CEO of Sumitomo Rubber Industries, Ikuji Ikeda, who delivered an address and unveiled a plaque to mark the opening of the facility.

Ikeda said the the reasons for proceeding with the investment – despite the challenges of developing a TBR factory from scratch – included the African market’s potential and particularly the Free Trade Agreement which would support SRI’s business initiatives. He added that local TBR tyre production would result in the expansion of business for truck and bus vehicle manufacturers and present opportunities for government related businesses.

CEO of SRSA, Mr Riaz Haffejee outlined the vision and purpose of the TBR facility and the range on offer. “We will be industrialising a total of 24 sizes between our Dunlop and Sumitomo brands, from this year until September 2019,” he said.

Haffejee also elaborated on the community impact that the investment and development of the factory has had: “Following SRSA’s first phase factory investment in 2014 which saw us increase our output of high-quality passenger and sport utility vehicle (SUV) tyres at this plant, the new TBR factory has created growth and a brighter future for the local community. SRSA’s total investment in employment, utilities and procurement has doubled since 2014, which has had a direct impact on the town and has served as a catalyst for community development and entrepreneurship.”

Ikeda also noted that 19 TBR employees had been sent for training to the company’s Miyazaki factory in Japan, where they were able to develop their technical methodology and gain an understanding of SRI’s processes in order to transfer this knowledge to shop floor staff in South Africa.

The keynote address at the launch was delivered by the MEC for Social Development, Weziwe Thusi. Guests were entertained by local performers, Thee Legacy, as they enjoyed a three-course luncheon.

Renai Moothilal, executive director of NAACAM (National Association of Automotive Component and Allied Manufacturers), who is also overseeing the operations of the SATMC, remarked: “SRSA must be recognised, not only for its significant investment in plant and processes, but for its commitment to a region outside South Africa’s industrial heartlands, and its contribution towards employment.

Production at the plant commenced as planned in July 2018. The local production of the TBR range – following extensive research and development processes – will ensure that customers, both in South Africa and on the African continent, have the right tyre for the country’s specific application. These will be designed in Japan, tested in Africa and manufactured in South Africa, for Africa with the Ladysmith factory certified to test TBR tyres to European compliance standards.

The history of innovation and proven pedigree that the Dunlop brand holds in the tyre business, together with the latest Japanese technology and engineering insights from SRSA’s parent company, SRI, make for a formidable combination in the tyre industry.