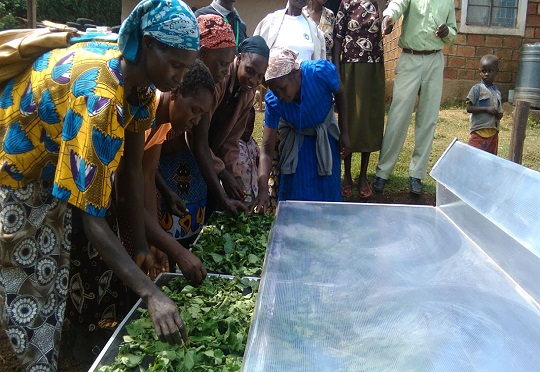 Smallholder farmers in rural villages of Murang’a County in Central Kenya have traditionally grappled with produce glut and poor market pay as a result of over production of key produce like vegetables and fruits.

But an innovative project is assisting them add value to the bananas through solar drying which has more than tripled earnings, and increased the shelf life of the produce by up to four 18 months.

Vegetables like spinach and kales and fruits including mangoes, passion fruits and bananas have been adopted by farmers who have traditionally been trying to diversify from the maize and beans in a bid to increase earnings.

But markets haven’t been responsive and sometimes farmers have always sold their produce at dismal prices. A market oversupply also meant farmers would go home with their produce which would make them go bad within no time.

A partnership with a company private food making company called Azuri Health Limited has however given the farmers a new lifeline, by introducing them to low cost solar drying technology.

The farmers assembles a locally made solar dryer shaped like a polythene dome which has delivered a value added, year-round market for their produce, across both fruit and vegetables.

The dryer is modeled to retain as much heat as possible within the polythene dome, with temperatures in the dome getting as high as 70 degrees. The black polythene traps the heat and beneath it is a layer of sand that sees the heat retained. An extractor fan takes away the hot moisture coming from the fruits and vegetables and completes the drying process. A thermometer used to regulate the temperature allows the farmers to estimate the maximum time that a produce should be dried to avoid products getting over dried and burning. Farmers therefore monitors the products in the dryer constantly and closely.

The modest dryer is a far cry from the mainstream dehydrator designed to dry to a high quality, but which is beyond the means of many of the farmers, at a cost of around Sh28,000 from local suppliers such as the Vibrant Health Organization.

Farmers have also been involved in farmer training days where they are thoroughly trained on proper ways of handling produce before and after drying after most of the products farmers were handling started going bad.

Preserving fruit and vegetables has brought many advantages, including the big addition in value that it creates. For example, two raw banana fingers weighing an average 200 to 240 grams will sell for Sh50 to Sh60. But the same volume of bananas dried sell for Sh150 at local health stores.

Farmers who dry their produce also manage to spread their earnings across the year, selling at times when prices are higher and improving their own family’s diet, by retaining some of their produce for times when fresh produce is hard to find.

Farmers now sell their produce directly to Azuri Health insulating their produce from vagaries of market. Some of the products that the company packages from what they get from the Murang’a farmers include Nutriporridge flour, Sweet Potato Flour, Kahurura Powder (made from a plant in the pumpkin family), sweet potato cookies, and a range of dried fruits such as mangoes and pineapples.

“There is nothing as heartbreaking as a farmer who goes to the farm invest so much of her resources, time and energy even as he or she is unsure of whether the markets will respond to her produce and whether he will get any profits from her investment. It is one of the predicaments we had lived with for so long,” said Samuel Njururu, one of the farmers in the drying project who specializes in growing passion fruits, mangoes and bananas.

Ruth Kimakia, another farmer explains how she had abandoned her banana farm after seasons of disappointment which saw the land turn into a bush. “It took a lot of convincing from my fellow farmers to get me back to the farm. I had to first see from them that this project worked for me to be part of it. Right now I earn more than triple what I earned selling raw bananas. The future is value addition,” she said.