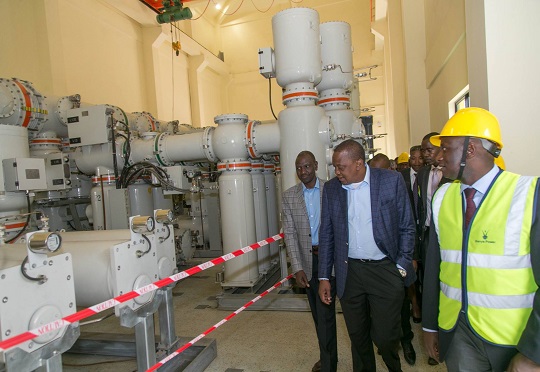 The substation, the first of its kind in East and Central Africa, will handle the power coming from the Olkaria Geothermal Power Station and will create an alternative power chain for the city.

“The KShs.13 billion project, will greatly improve the quality of power in Nairobi’s City Centre, serving the Industrial area, Mombasa road, Upperhill, the entire Central Business District (CBD), Lower hill and Kilimani area,” said President Kenyatta when he spoke at the event at GIS station on Bunyala Road. “It therefore creates additional contingency in electricity supply thus enhancing the reliability of power in this area,” added the President.

Gas Insulated Substations are high voltage substations in which the major structures are contained in a sealed environment. It is reliable, requires little maintenance and is compact thus requiring little space.

President Kenyatta said the improvement of power supply in the city is aimed at creating a conducive environment for business and industry so that they can in turn create more jobs for Kenyans.

“This initiative feeds into one of the key pillars of the Big Four Agenda, Enhancing Manufacturing, to create quality jobs for Kenyans,” said the President

He added that the Government will remain steadfast in supporting the concept of Build Kenya Buy Kenya, to guarantee increased job creation and growth of local industries.

President Kenyatta, who was accompanied by Deputy President William Ruto and Energy Cabinet Secretary Charles Keter, said the expanded national access to electricity has been achieved through various connectivity initiatives such as the Last Mile Connectivity Project, the electrification of public facilities and the Global Partnership on Output Based Aid (GPOBA) programme targeting people living in informal settlements.

“These programmes are a major pillar in our plan to sustain the rapid pace of electricity connections in the quest to achieve universal access to electricity by the year 2022,” said the President.

President Kenyatta’s Government has also invested heavily in power generation. The proportion of geothermal capacity increased to 28.43% from 14.8% in 2013, significantly reducing dependence on generation from expensive diesel power plants.

The total number of customers connected stands at 6.7 million translating to a national electricity access of 74% against 27% in 2013.

President Kenyatta challenged Kenya Power to strive to become the biggest corporation in Kenya since it has the potential for that achievement.