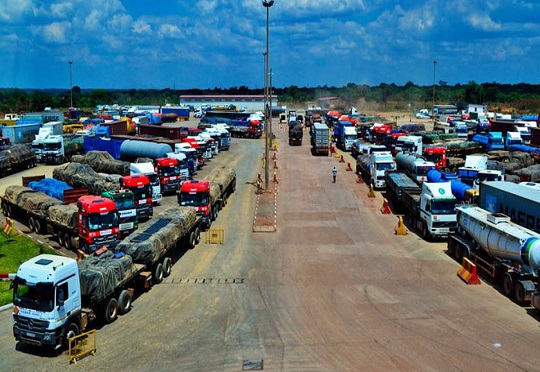 Construction of dry port commissioned at the DRC- Zambia border

Initial steps towards the construction of a $300 million dry port at Kasumbalesa border post, on the DR Congo and Zambia has begun following the commissioning of the project.

Construction is expected to take 36 months generating over 2,000 direct jobs and over 5,000 indirect jobs from the numerous services needed to operationalize the facility.

The port will be connected to five major maritime ports namely, Beira, Mombasa, Dar es Salaam, Walvis Bay and Durban ports, integrated into the international logistic chain for the eastern and southern African.

Once completed, the facility is expected to resolve congestion currently experienced at the Kasumbalesa border owing inadequate facilities as it will also operate as a terminal of containers with dedicated area for parking oil tankers and trucks with dangerous goods.

At the ceremony held at the Kasumbalesa border, were the DRC Prime Minister, the Vice-Prime Minister and Minister of Transport, Ministers of line Ministries, Governor of Haut Katanga and the Director General of the Multimodal Freight Management Authority (OGEFREM). COMESA was represented by the Director of Industry and Agriculture Mr. Thierry Kalonji.

The Vice Prime Minister who is also the Minister for Transport and Communication of the DRC, Hon Jose Makila, said the dry port facility will be constructed to international standards.

He said: “With appropriate equipment, the facility will handle the functionalities of a maritime port among them cargo handling, storage, inspection, quarantine, immigration and clearance of goods. It will help to eradicate fraud and contribute to improve the public revenue collection.”

Mr Kalonji, who represented the Secretary General of COMESA, described the project as a game changer for trade facilitation at the border.

“This facility will be ultimate solution to many challenges that cross border traders are facing at the Kasumbalesa which is a strategic location connecting Cape to Cairo through the Trans-African high way corridor,” he said. “It will accommodate COMESA trade facilitation instruments such as the Yellow Card, the Regional Customs Bond Guarantee Scheme and COMESA Virtual Trade Facilitation System.”

The Director General of OGEFREM, Patient Sayiba Tambwe said, the facility shall handle more than 2,500 trucks with the possibility clearance of more than 2,000 trucks per day against 500 currently.