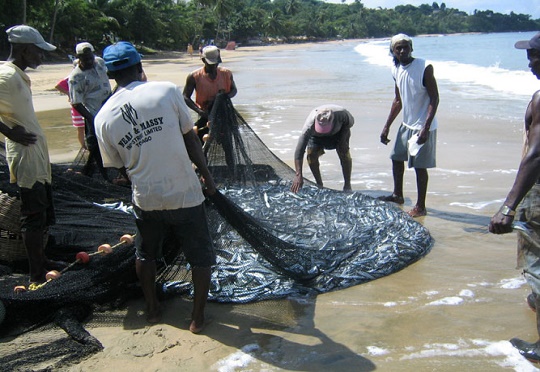 In welcoming remarks to delegates attending the 24th Intergovernmental Committee of Experts (ICE) of Southern Africa on the theme; “Blue Economy, Inclusive Industrialization and Economic Development in Southern Africa”, Mr. Adejumobi said the ECA recognizes the immense potentials of the blue economy for fostering industrial growth and economic development.

He said the ECA will therefore continue to support the continent through research and analytical work, technical assistance, capacity building, advocacy and awareness raising activities so that it can collectively and sustainably benefit from its blue economy resources.

“This forum is meant to serve that purpose of further debate and discussion, and policy articulation by member States in the region on the issue,” said Mr. Adejumobi, adding that the blue economy, which some refer to as the ocean economy is “Africa's hidden treasure”.

“The blue economy can be the engine of economic growth, the basis of socio-economic development and industrialization for many African countries, if well utilized. The maritime industry, for example, is estimated at over $1 trillion, and there are other related and emerging sectors of tourism, offshore renewable energy, aquaculture, seabed extractive industries, marine biotechnology and bio prospecting,” he said.

Mr. Adejumobi said Africa’s coastal sector remains largely underdeveloped, under-utilized, and poorly governed, which has enabled other forces from outside the continent to benefit more from it, than its citizens.

In China, for example, citing a report of the Economist Intelligence Unit, Mr. Adejumobi noted that “the ocean economy contributed $962 billion or 10 % of its GDP and employed over 9 million people in 2014.

“While other countries and regions are harvesting the gains and returns from the blue economy, West Africa for example, is estimated to be losing about $2 billion annually from illegal fishing,” the ECA Southern Africa Chief said.

He said some Southern African countries have adopted strategic plans and development blueprints to transform their blue economy sector.

Seychelles has developed a National Blue Economy Roadmap through which it seeks to accelerate economic growth and diversification, while Mauritius has Vision 2030, which provides an overall development framework, including on the blue economy sector.

“However, the blue economy sector is very complex and dynamic, with various challenges and risks which require more of collective action, cooperation, partnerships and regional frameworks in order to address them,” said Mr. Adejumobi.

Some of the associated challenges and risks of the blue economy include issues of governance and security of the ocean, piracy and terrorism, climate change, ocean environmental sustainability, poor infrastructure and technology, effective production connectivity with land-linked and land-locked countries, financing, and poor technical skills and capacity, he said, adding that more needs to be done at the regional level in the transformation of the blue economy sector through an integrated and holistic approach.

The African Union hails the blue economy as the new frontier of African renaissance and its representative at the meeting, Mr. Auguste Ngomo, said the blue economy opens doors for Africa’s industrialization and economic development.

“Like the role played by charcoal and steam engines for the first industrial revolution or oil and electricity for the second, the exploitation of the ocean potentialities can lead us to our economic revolution. The potential of oceans, lakes, and rivers is unlimited,” he said.

“We can be inspired by other nations and regions, learn and acquire experience from them but Africa must focus on its own path, on its own strengths and realities. Our evolution towards blue economy is an ambitious but achievable adventure.”

Senior policy makers from the region, leading practitioners and experts, private sector operators, civil society, regional and international development agencies, including development financial institutions are attending the meeting. The meeting is hosted by the Government of Mauritius.