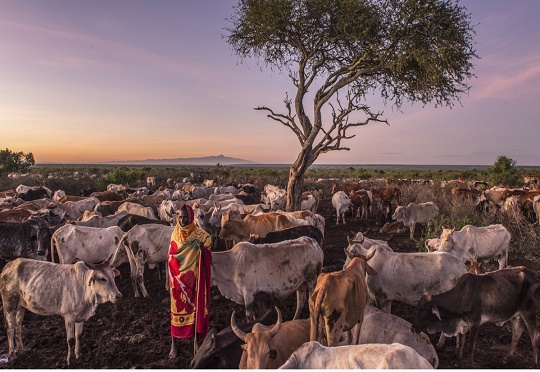 [Kenya Business Week] Sustainable businesses that leave no one behind

Despite more than 80 per cent of the beef consumed in Kenya being produced by pastoralists according to a 2011 study, they still struggle with poor market prices and scarcity of fodder as climate change takes a toll on their way of life.  It is heartwarming to then learn that this week, 36 entrepreneurs from Kenya’s arid Lands have received 300 million-worth of business development grants to build a more inclusive and competitive livestock value chain. Previous activities have included building local capacity and transforming the livestock sector by catalyzing economic growth among pastoralist communities, blockchain livestock traceability system, cash payouts to buy fodder and structured markets that allow pastoralists get value for their livestock.

Still in agriculture SunCulture, a Kenyan-based technology company and a leader in solar water pumps and irrigation solutions for small holder farmers, has closed an investment round with the EDF Group, one of the world’s largest electric utility companies and a global leader in low-carbon energy.

In matters government, President Uhuru Kenyatta has issued a directive freezing all new government projects until those that are ongoing are completed. The President issued the directive to all government accounting officers whom he warned would be held responsible if they sanction new projects without express authority from the National Treasury. This comes as Mr. Kenyatta and Prime Minister of the Republic of South Korea Lee Nak-Yeon held talks to enhance Korea’s role in Kenya’s economy and the achievement of the Big Four development agenda. Kenya has held similar talks before with South Africa, India and Zambia among other countries as it seeks to bolster its trade relations.

In aviation, Embraer and Kenya Airways have signed a multi-year contract for the Embraer Collaborative Inventory Planning (ECIP) program. Under this contract, Embraer will take over the planning and replenishment of a sizeable portion of Kenya Airways’ spare parts stock covering the 15 Embraer E190 aircraft operated by the airline. The Kenyan national carrier has previously collaborated with Embrarer in purchase of aircrafts. The latest move is one of the many that the airlines has invested in to improve efficiency and grow passenger numbers even as it continues to fly into losses.

Under the private sector activities, latest survey data from Stanbic Bank Purchasing Managers’ Index™ has signaled a robust, albeit softer, improvement in business conditions across Kenya’s private sector in June. This was signaled by sharp, albeit slower, rises in output and new business. This index comes after a similar one in February indicated that private sector output growth accelerated to fastest in two years in January.

Kenya has said it will double its shareholding in pan-African infrastructure investment platform Africa50, increasing its current investment to $100 million.

And finally in the manufacturing sector, Kenya Association of Manufacturers has appointed Sachen Gudka as the new Chairman and Mucai Kunyiha as the Vice Chair to lead the organization for a two-year term. Mr. Gudka who has been vocal on matters sustainable future  through energy efficiency and waste management has replaced Flora Mutahi whose tenure has expired having aggressively focused on the fight against illicit trade, women and inclusivity. She was recently appointed to the UN Global Compact Board.