Is Africa a lost cause? With stories of disease and famine coming out of the continent every day, it is easy to understand why some might come to that conclusion. Africa is a charity case, the thinking goes, and not a winning one at that.

Even the brightest academics like Vijay Mahajan can be swayed by the constant wave of negativity about Africa in the mainstream media. 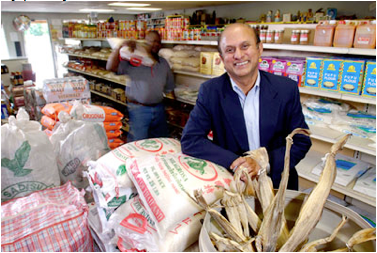 Professor Vijay Mahajan wrote “Africa Rising: How 900 Million African Consumers Offer More Than You Think” (Wharton School Publishing) after a journey across Africa over a period of three years.

“Like many people living in the developed world, I saw Africa as more of a charity case than a market opportunity,” says Mahajan, a marketing professor at the McCombs School of Business at The University of Texas at Austin.

To set the record straight, he embarked on a journey across Africa, traveling thousands of miles and listening to hundreds of stories from business leaders, entrepreneurs and consumers over three years.

“What I found was that Africa is a place of extraordinary complexity, wealth and creativity,” Mahajan says. “Whatever its challenges, and there are many, from diseases such as AIDS and malaria to corruption to all-out war to the current global recession, the signs of Africa’s promising future were everywhere.”

The trip is captured in Mahajan’s new book, “Africa Rising: How 900 Million African Consumers Offer More Than You Think.”

Africa is Richer Than You Think

Mahajan makes his case for Africa as a compelling business opportunity in many ways, beginning with a presentation of the economic data. Very few know that Africa’s economic strength is greater than India’s, which has a comparable population.

“You aren’t going to find much about politics in this book. What you are going to find is the very positive spirit of the entrepreneurs who are trying to make a difference in this consumer market,” Mahajan says about “Africa Rising.”

“Africa has some of the poorest nations in the world, but it is wealthier across the continent than India,” Mahajan says.

If Africa were a single country, it would have had $978 billion in total gross nation income in 2006. This places it ahead of Brazil, Russia and India–and 12 countries in Africa are wealthier than China in per capita income, he says.

The African diaspora and the informal economy also enrich the continent in many ways that aren’t recognized, Mahajan says. The total dispersed African population around the world is estimated at about 100 million people. Unlike past generations that might have left the continent altogether and never looked back, today’s diaspora remains engaged. They are instrumental in the African economy, sending money home to families, making investments and contributing to charitable causes.

Africa One, Two and Three 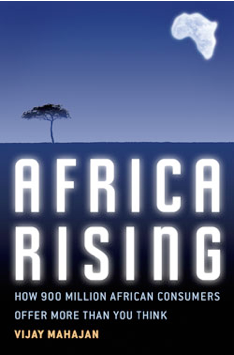 Mahajan breaks down the African market into three segments–Africa One, the small minority of people with incomes similar to top-earners in the West; Africa Two, the vast middle class; and Africa Three, the underclass whose members are striving to reach Africa Two. Businesses catering to Africa One understand that these consumers have purchasing tendencies like other wealthy shoppers. This is contrasted with companies selling products in the smallest currency to reach Africa Three. Water vendors in Nigeria are shown in the book selling small bags of drinking water for five naira, or about three cents.

However, Mahajan focuses mostly on Africa Two. He argues that the sheer size of this market means it will be the driver of consumer spending in the future.

“In Africa Two, we are talking about 300 to 500 million people,” he says. “They may not be rich, but collectively they have immense buying power.”

Africa Two is made up of service-sector workers such as teachers, nurses, drivers and those who work in the retail, tourism and hospitality industries.

Most businesses are targeting Africa Two, Mahajan says, and the successful ones carefully consider local social and cultural customs. From Unilever, the multi-national consumer product company, Mahajan learned the term “consumer safari,” where managers spend a day with consumers in their homes to understand how they use products.

An example Mahajan cites is from the Korean manufacturer LG Electronics. Although it only arrived in African markets in the past decade, LG has made rapid progress by actively organizing the market. When LG arrived in Morocco in 2000, Sony was already the dominant brand, but it was sold only through traders rather than the dedicated dealers. Since 2000, LG has had an annual growth rate of almost 50 percent in Morocco, driven in large part by its promotions centered on Muslim holy days. The company organized promotions for refrigerators during Eid-al-Kebir, or Festival of Sacrifice, when devout Muslims traditionally sacrifice a lamb, on the 10th day of the last month of the Muslim calendar.

LG also recognized that Ramadan is an important time for sales of televisions because it is a time when many new television programs are developed. LG created promotions for Ramadan, and by 2007 this holiday period accounted for 25 percent of its sales of televisions and other appliances. LG has also tapped into the returning diaspora. In the summer, Moroccans living and working abroad swarm back home, their pockets full of cash, so LG organized big promotions for these returning workers and family members.

The astounding dominance of the youth market in Africa will have ramifications for the continent’s economic trajectory, Mahajan says. As populations in developed countries decline with decreasing birth rates, Africa’s will continue to grow–and grow younger. An astounding 41 percent of Africa’s population is under the age of 15, and these young people are quickly becoming better educated and globally savvy.

A new Shoprite in South Africa.
African youth are now being born into a media-rich culture. Though the West might still have visions of tribal huts on the savannah, separated from civilization, the reality is far from that. Africa is not a “media dark continent,” Mahajan says. From a flourishing Nollywood movie industry in Nigeria to a classic Arabic movie industry in Egypt to numerous satellite radio and TV channels to mobile phones to broadband and internet, media is exploding on the continent.

Africa’s youth is extremely optimistic, Mahajan says. They are known as “cheetahs” and have no recollection of the colonial past experienced by older generations, the “hippos.”

“The sky is the limit for the cheetahs,” Mahajan says. “Everywhere you go you see the desire to do well and the desire to move up. Opportunities abound for businesses to build connections with this huge market.”

As Mahajan was writing the book, he often conversed with Florence Atiase, an accounting lecturer at McCombs who is from Ghana.

“Mahajan tells a story that we don’t hear much about in terms of development in Africa,” Atiase says. “He also makes this point very clearly that it is very difficult to speak of Africa as one, but that there is a trend of market growth and local entrepreneurship.”

The book contains hundreds of stories–from meetings with the most influential business leaders such as Mo Ibrahim, the founder of the telecommunications company Celtel, to anecdotes about local buying habits of everyday consumers. 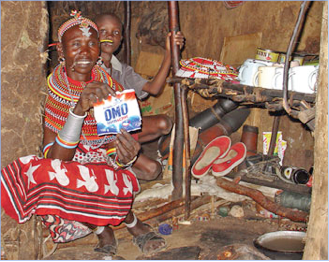 A woman in Kenya holds a packet of laundry detergent. A consumer market of 900 million people could represent the next big global opportunity.

Ibrahim told Mahajan, “Yes, we have all of these problems, but Africa is a very big place. There are 53 countries, and maybe there are severe problems in just four or five countries.”

Ibrahim also said that despite the West’s often bleak media coverage of Africa, the reality isn’t that bad from a business standpoint.

“When there is a gap between reality and perception, there is good business to be made,” he noted.

The bottom line is that Africa will soon have a billion consumers, Mahajan says.

“And just like consumers in other developing countries, they want the best for their children, better than what they had,” he says. “They need food, clothing, soap and shelter, and desire cell phones, medicine, cosmetics, music, television, toys, computers and movies. While there are challenges, entrepreneurs and business leaders are finding opportunities in almost every industry and every country across the continent.”

Since writing the book, Mahajan has been asked if the worldwide economic recession will stop Africa’s rise.

“Ten years ago nobody would have even asked this question,” he says. “Now it shows that people consider Africa as an important player at the global table.”

And like every country or region, the people of Africa will feel the effects of the slowdown differently.

“Africa One will weather it just as wealthier people in America will,” he says. “Africa Three have so little to begin with that they won’t be affected. Africa Two will feel it the most.”

However, he says that the large informal economy running throughout the continent might act as a buffer.

“It is all cash in many areas,” Mahajan says. “There is no credit. They don’t borrow money. It will act as a cushion. Ultimately, Africa will come out of it like everybody else.”