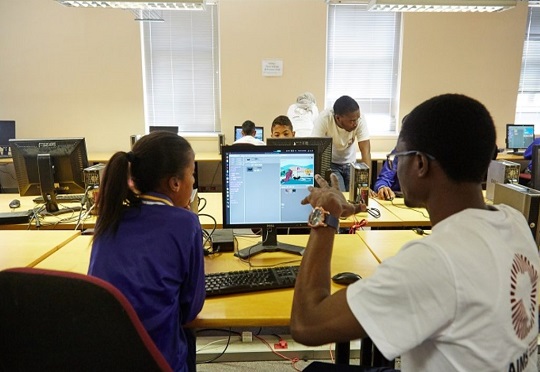 The 2018 edition of Africa Code Week (ACW) has kicked-off in Madagascar with its first-part series of Train-the-Trainer (TTT) workshops.

More than 200 local teachers and parents are set to receive hands-on training on the open-source Scratch learning interface, which will enable them to introduce and sustain digital skills development in their respective classrooms.

Now in its fourth year, ACW instills 21st century skills among African youth with a key focus on capacity-building and female skills development and training in support of the #eskills4girls initiative.

Introduced in 2015 by SAP CSR EMEA, the initiative is now actively supported by key partners UNESCO YouthMobile, Google and the German Federal Ministry for Economic Cooperation and Development (BMZ), 15 African governments, over 150 partners and 100 ambassadors across the continent. All are joining forces to bridge the digital and gender skills gap in Africa, empowering youth with the skills they need to become key players in the digital economy.

To date, ACW has introduced digital skills to more than 1,8 million children across 35 countries and aims to empower 70,000 teachers while impacting the lives of 2 million youth by 2020.

This year, SAP has set a target of reaching 600 000 youth across 35 African countries during the month of October, with actual dates to be set by each country to accommodate their school calendar.

“2018 will be an exciting year as ACW shifts into second gear from igniting the continent and raising awareness of the importance of digital education to sustaining the impact of the programme through capacity-building efforts in close partnerships with governments, schools and NPOs,” says Karolina Telejko, Director of EMEA Corporate Social Responsibility at SAP and Project Lead for Africa Code Week.

With over 25,000 teachers trained over the past three years and an average ratio of 72 youth engaged per trained teacher, Train-the-Trainer (TTT) sessions are the cornerstone of Africa Code Week’s sustainable impact across the continent. They empower teachers with skills and teaching materials that facilitate the integration of digital skills into the school curriculum.

The 2018 edition will see over 20 TTT workshops funded by SAP CSR EMEA and hosted by either the ACW team, Ministries or NGOs across the continent. “Taking Africa Code Week to the next level of capacity building impact means more than multiplying teacher training on a national and continental scale. It is also about providing them with a comprehensive curriculum that imparts 21st century knowledge above and beyond actual coding proficiency, namely deepening understanding of computational thinking and tackling data science and analytics,” Telejko explains.

The fourth largest island on the planet, Madagascar has a population of more than 26 million with over 50% comprising of young people.

Its economy is largely dependent on the export of agriculture products, which employs roughly 80% of the population.

In an effort to eradicate poverty, Madagascar is taking steps towards expanding its ICT infrastructure and access in the country through a number of measures, including the establishment of ICT centres in schools.

“We would like to thank SAP, UNESCO and Africa Code Week partners for their strategic vision to build teacher and community capacity for ICT skills development which is fully aligned and supports the Ministry of Education,” said Lalaharontsoa Rakotojaona, Director General of Secondary Education and Mass Training, at the press conference organized at EPP Antanimbarinandriana on June 6.

Cathy Smith, Managing Director at SAP Africa, insists that public-private partnership and open collaboration can bring transformative change to Africa’s youth. “SAP’s mission is to make the world run better and improve people’s lives: to power opportunities through digital inclusion, we need to scale-up capacity building efforts in close liaison with the private, public and nonprofit sectors. With Africa being the youngest talent in the world and ACW having built such a solid family of engaged stakeholders and like-minded partners, STEM skills development is entering a new era of unprecedented collaboration and impact.”