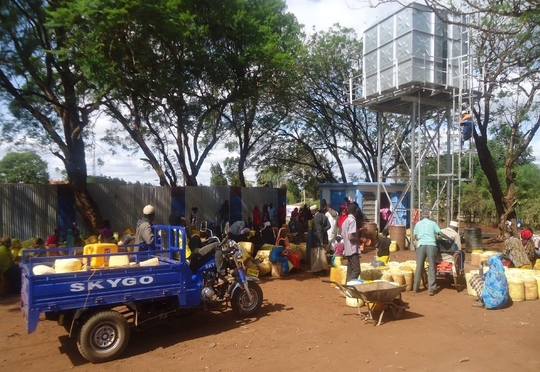 Technology has been used to address some of Africa’s most pressing challenges. From internet access, infrastructure, drought and much more. Leading technology companies are using their resources and technologies to help marginalized communities in the continent overcome poverty, injustice and even discrimination. This is something we will still be seeing in the coming years.

This week, for instance, IBM researchers in Kenya unveiled a cloud-hosted Water Management Service Platform to address the needs for safe water in remotes parts of northern Kenya. The project was developed in collaboration with various private and public sector partners in Kenya as representatives of the local governments in the northern counties of Kenya. This was not the first time IBM was being involved in supporting local communities. We have previously reported on how IBM has invested $70 million in building much-needed digital, cloud, and cognitive IT skills to help support a 21st-century workforce in Africa. Back in 2016, the company also unveiled its second Africa research lab in South Africa to use cognitive computing and IoT to keep track of diseases and forecast air quality.

The power of technology and fashion have combined in a thought-provoking project that demonstrates how data can transform African cities. Tech company Siemens used data from the cities of Lagos, Nairobi, and Johannesburg and wove it into unique fabrics which tell a story about each city. Just a few months ago, the company also won the Digital Solutions of the year award for its Siemens South Africa Head Quarters Micro Grid Project at the Africa Utility Week Industry Awards evening which took place in Cape Town. It also recently partnered with Anglo American Platinum to collaborate on digital skills development in Africa

As more African business continue to adopt online payments, Online food delivering company Jumia Food this week also announced the launch of online pre-payments for its customers in Kenya and Uganda. This new payments option is an addition to the post-payment option, which highly featured cash and Mpesa on delivery. The company has in recent years announced new partnerships with more restaurants as it seeks to reach more customers who spend most of their time online.

This week, global blockchain logistics company TMX Global Coin also announced plans to launch its services in Kenya.  The company says it wants to serve the increased demand for its services in the region. This basically means blockchain technology is in Africa to stay. In a previous article, we highlighted how Kenya’s electoral body is eyeing the technology for elections transparency.  ImpalaPay Kenya and PesaChoice of Rwanda just recently successfully concluded pilot test of cross-border mobile money transfer on the stellar blockchain. Zambia also recently announced plans to build a blockchain land titling program. In July, Nigeria Customs Service became among the global early adopters of the Oracle Blockchain Cloud Service which has recently been introduced. Still, on logistics Software technology company BanQu, this week also developed the first-ever, blockchain economic-identity technology solution. The solution enables a secure, immutable platform and creates economic opportunities for small-scale farmers in Africa.

One of the challenges facing Africa has always been energy/power. How can this challenge be solved using technology? According to a 2018 white paper on the “Digitization of Energy Transmission & Distribution in Africa by General Electric released this week, Kenya’s power sector presents promising opportunities for grid digitization.

FMO also announced this week that it is extending a convertible grant to Kenyan-based FinTech platform Lendable providing a ‘first loss’ backstop that is expected to unlock an additional $4.5 million from commercial investors. This is not the first time FMO is entering into similar dealings. In April, Access Bank Ghana entered into a partnership with the Dutch Development Bank, for a $25 million facility to boost its lending capacity.  FMO has also been working closely with African banks, in 2014 for example, it also signed a  $30 million deal with Access Bank to support local female entrepreneurs.

This week, Nopia Ride, the first ever full electric mobility service in East Africa has launched its cab services in Kenya through Finnish firm EkoRent Africa. This will be the first time Electric Rides are available in East Africa for commercial use, a move that is expected to break the dependency on petrol and diesel in the region. In Ghana, senior representatives from the United States participated in a U.S.-Ghana Cyber Study visit to facilitate stronger bilateral cooperation on cyber issues, including building government capacity to address emerging challenges and shared threats.

Agri-tech startup Agro Supply Uganda Limited was also this week declared the winner of Seedstars Kampala. The startup beat ten other startups that had been selected present ideas at the Seedstars competition held at Outbox Hub last Friday.