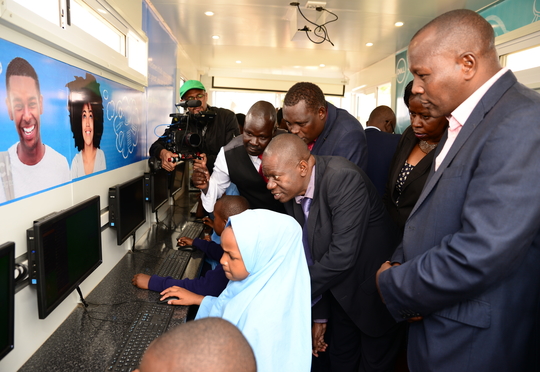 Despite the obvious digital divide, African countries and other developing nations are finding ways to achieve the potentials of digital learning like the developed counterparts. E-learning has completely transformed the way in which learning is imparted to students. Unlike, the traditional chalk and board method which most of us went through during our early days in school, e-learning makes learning simpler, easier and more effective. This is why African governments and even non-governmental organisations are seriously advocating for it.

In Kenya, this week, Camara Education in conjunction with Dell and Computer Aid unveiled computer classrooms and solar powered labs in Kajiado County. The programme is complementing the implementation of the Digital Literacy Program by the Kenyan Government (DLP) in all 23,951 public primary schools countrywide. This came at a time when experts from Europe and Africa are expected to Gather in Kigali Rwanda on September 28, 2018, for eLearning Africa conference. Just recently, aNewSpring, a Dutch-based learning technology company also announced the opening of its Johannesburg-based office.

This week, Mastercard also partnered with Microsoft to introduce Mastercard Track, a  global trade platform that will simplify and enhance how companies around the world do business with each other. This was not the first time Mastercard was making some major announcements. Just recently, the company partnered with Vodacom and BancABC to introduce the first online card in Tanzania – the M-Pesa virtual card. In Zambia, it unveiled a new partnership with EcoCash and launched EcoCash Scan & Pay, a simple, secure and instant mobile payments solution for consumers and merchants. In South Africa, Mastercard partnered with Entersekt to enable Nedbank’s customers to make QR payments to Masterpass, Pay@, SnapScan, and Zapper merchants and billers through the Nedbank Money app. These are just a few of the payment partnerships the company has unveiled this year.

Loon, the Alphabet company that is planning to launch balloon-powered internet connectivity in Kenya next year, this week also announced that it has successfully sent a test internet connection 1,000 kilometres across seven balloons. That represents a distance that would span the entire of Kenya from the port city of Mombasa to the Kenya-Uganda border. Back in June, the company signed a definitive agreement with Telkom Kenya to pilot an innovative new 4G/LTE access network service in Kenya. Telkom Kenya, on the other hand, has been working hard to increase its 4G coverage. Recently, it unveiled 200 new 4G sites in Kenya, raising the total number of 4G sites in the city owned by Telkom to 300.

Still this week, Samsung announced that it was going to mentor 19 startups from South Africa as part of its employee volunteer programme.  This will be done under the company’s Global Start-up Acceleration Programme in partnership with the Small Enterprise Development Agency (SEDA) and NGO Nangila in the country. In 2017, the company, under the same programme conducted a week-long workshop in Ghana aimed at empowering young girls with future-focused ICT skills. In Togo, the company set up a Mobile clinic in Togo Ministry of Health and Vision Togo.At least 24 villages in the Kara region benefited from the new health initiative unveiled last year.

Latest insights from International Data Corporation (IDC) released this week showed that Africa and Middle East personal computing devices (PCD) market, declined 7.7% year on year in Q2 2018.Similar data released by IDC in June also showed that Africa, the Middle East and Europe smartphone markets hit record value. The same report in a previous article published by Africa Business Communities revealed that Africa’s smartphone market declined in Q4 2017 despite the strong performance of the region’s biggest markets. While this was happening, Vodacom Tanzania this week signed a partnership deal with Google to give customers the option to pay for content on the Google Play Store using Vodacom Airtime balance.

Oracle, this week held its Impact Technology Summit in Nairobi Kenya. The summit brought together domain experts and business leaders to discuss the influence emerging technologies has on business innovation. The company has recently been unveiling new products to support innovation. Last year, it introduced its next-gen cloud applications to support Kenya’s digital economy. The same applications were also introduced in Botswana, Mauritius and Nigeria.

As more and more Kenyans continue to buy things online, Kenyan new online retailer Hashmart announced that it is betting big on electronics to give established players in this segment a run for their money. Cab hailing service Taxify also rolled out a new feature to enable its drivers to maximize their daily earning potential. The Driver Destinations feature will allow drivers to indicate where they’re going and then synchronize it with the Taxify app for drivers to find and connect with trips that are on their way.