How satisfying to see that a friendly meeting in Djibouti in 2020, is followed by the installation of over 5000 solar panels in Somalia more than a year later. It happened just before Covid began spreading, and it was impossible to predict how this virus would impact lives around the world shortly after.

The Independent Energy team flew out shortly after concluding these constructive talks, just in time because the airspace from and to Djibouti was closed just after. When the team returned to the Netherlands, they immediately began developing a detailed solar design that combines efficiency with a preference for solar, over the use of diesel in this isolated power network.

There is always a lot going on at the Independent Energy offices; set routines include quotation preparation, detailed design of solar systems, as well as pre assembly and installation of various solar systems. The company envisions the world, particularly Africa, using renewable and specifically solar energy as the primary source of energy in the future, replacing generators and fossil fuel alternatives. As a result, increasing the proportion of renewable energy in Africa's energy generation mix is critical.

This project fitted exactly into this world vision and the team was excited to get started. From the start it was clear that this client was an innovative and forward thinking businessman, and the MoU for this project was signed. 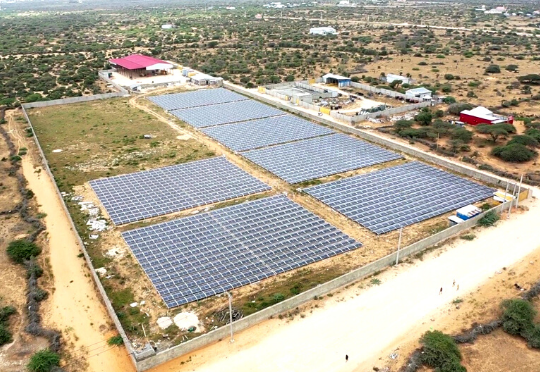 It was now time for Independent Energy to live up its mission: “On time, within budget, without surprises”. Designs were finalised, in-house manufacturing was completed and consequently, containers full of solar equipment arrived in Mogadishu, where Independent Energy's clients leading electricity company is based. The broad scope of this project was starting to come together as the team presented training to the project installers, explaining detailed installation instructions, to  ensure that the installation of the solar arrays happened without any problems.

The heart of this installation; where everything comes together is a containerised power management module, complete with an innovative Independent Energy solar roof shielding critical components against the hot Somalian sun, while generating extra power simultaneously. The installation of the 5000 panels is nearly complete, with further cabling and grid connection expected later this year. With a solar panel capacity of 2000 kWp (2 MWp), the system will produce over 3.4 GWh per year, saving a massive 1 million litres of diesel per year.

''For us, it was yet another mission accomplished: on time, within budget, without surprises,'' said Peter van Zwol, Managing Director, Independent Energy.

This project demonstrated how critical it is to understand client's needs and the importance of clear communication. Once this undrstanding was reached, Independent Energy was able to move quickly and deliver as expected.

Independent Energy BV is a company that designs, manufactures and install on- and off-grid solar and backup solutions worldwide from small house-size systems to large complete “plug and play” installations. The company has invested in modern technologies and systems which ensure that performance of the solar solutions can be assessed real time and technical issues can be detected at an early stage. The Company has been designing and installing solar systems from its offices, warehouse and workshop in Haarlem, the Netherlands, since 2011. Read Africa Business Communities recent interview with Sidney Zeeman, the Sales and Business Development Manager at Independent Energy.

Africa is at a crossroads. As one of the most vulnerable continents to climate change and climate variability, it has a strong incentive to join global efforts to reduce greenhouse gas (GHG) emissions and bolster its adaptive capacity  ...read full column here

Climate change is widespread, rapid and intensifying. These are the findings of this year’s Intergovernmental Panel on Climate Change (IPCC) Report released earlier this year  ...read full column here

Inequality in energy access in Sub-Saharan Africa that was rife prior to the pandemic must not be exacerbated ...read full column here