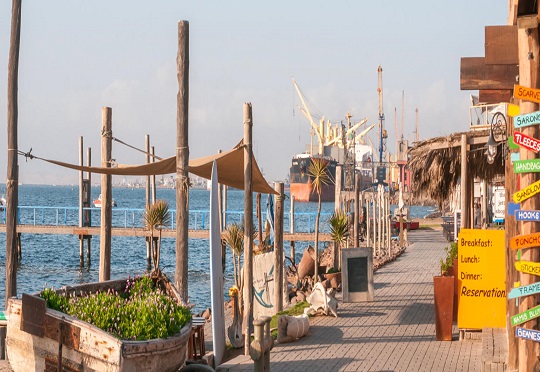 With its sand dunes and abundant birdlife, Walvis Bay is already an important centre of tourism activity in Namibia. The bay is a safe haven for sea vessels because of its natural deep-water harbour, protected by a sandspit, being the only natural harbour along the country’s coast.

The municipality of 110,000 people on the Namibian coast, draws large numbers of southern right whales to its waters, in this town whose name means “Whale Bay”. Immanuel Wilfried has been the proud mayor since 2016.

“Of all the towns, we probably have the biggest potential to add more value to our national tourism industry, thanks to the variety of opportunities. A waterfront of international standard is on the cards and we are getting ready to accommodate the foreseen increased number of tourists. The demand from various companies to purchase land is very high. Land for the construction of an oil refinery has just been allocated,” he said.

The growing interest in the city is largely due to the expansion of Walvis Bay port. Wilfried is looking forward to its inauguration and anticipates “not only jobs to be created and business to be boosted but also people to move and settle in town. The expansion of the port will benefit everyone: Walvis Bay, Namibia and all the landlocked countries,” he adds.

With a greater number of tourists, eating out places will be in demand and Walvis Bay has seen an upstart in new ventures, including a sushi restaurant – the first on the coast.

“Currently we have seasonal tourists, mostly pre-booked by travel agencies who just pass by. With the new infrastructure, tourists will now stop. I believe in this strongly. Therefore, I have invested in a restaurant: the first sushi lounge on the coast,” said David Hamupembe, a middle-aged instructor at the maritime school of Walvis Bay.

After learning about the future capacity of the port to host cruise ships and the construction of the waterfront and marina, Hamupembe opened his restaurant in May 2019 and employs 3 staff.

On 2 August, the Government of Namibia and the Namibian Ports Authority (Namport) inaugurated the new Container Terminal of the Walvis Port with a capacity to handle 750,000 twenty-foot equivalent unit (TEUs) and its four ship-to-shore cranes with 65-ton capacity.

This key milestone was realized with support and funding from the African Development Bank, amounting to $200 million, to Namport in 2013. The expanded port of Walvis Bay aims to be the preferred African west coast port for southern and central African logistics operations. Botswana, Zambia and Zimbabwe already have their dry inland ports.

With the expansion of the port, a special wharf was constructed to accommodate cruise ships. Direct access to the future waterfront will be key to attract more tourists.

Opposite the main gate of the port, the Mission to Seafarers, a Christian charity, has been serving merchant crews arriving in Walvis Bay since 1957. Gail Wearne has been working at the mission for 20 years, mostly as the manager. She hopes the expansion will bring more vessels and seafarers.

“It can only do us good. We used to have about 2,000 seafarers per month. Over the past two years it dropped and today we only receive approximately 1,300 people. This drop is due to different factors, mostly the reduced amount of time spent in port by the crews. With the expansion, there will be more ships and more people. The more people we get, the happier we are,” says Gail.