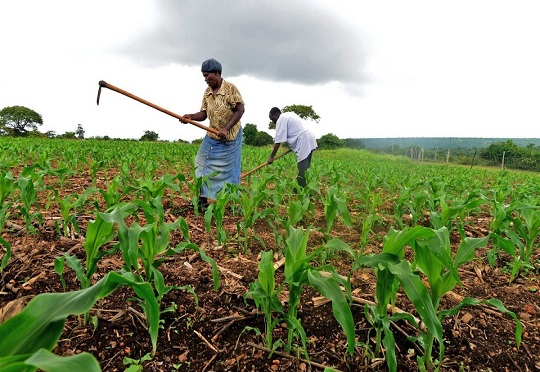 A 1.07 million euros climate change project aimed at building resilience of agriculture landscapes in Eastern Uganda, is set to be launched in June following the completion of preparatory activities.

The project titled: Enhancing resilience of agricultural landscapes and value chains in eastern Uganda – scaling up Climate Smart Agriculture (CSA) practices” will support the adoption of CSA practices and technologies in farmer cooperatives and primary schools.

Seven districts in eastern Uganda are the beneficiaries of the project which also seeks to develop enterprise platforms to enhance productivity, value addition, marketing and integration of CSA principles.

A total of € 1,076,271 has been provided to implement the pilot project in seven districts in Eastern Uganda with the European Union providing the bulk of the funds through COMESA amounting to one million euros. The funds will be managed by the United Nations Development Programme (UNDP) under a delegation agreement signed with COMESA in July 2018.

In addition, the UNDP will provide €76,271 while the Government of Uganda will contribute in kind through the Ministry of Agriculture, Animal Industry and Fisheries.

The Project Coordinator Mr Stephen Muwaya told stakeholders attending a meeting at Iganga town, Uganda, that procurement and installation of equipment that will be unveiled during the high-level launching ceremony was on course.

The meeting brought together technical officers from the local authorities in the seven target districts of Budaka, Namutumba, Bugiri, Busia, Kaliro, Kamuli, and Buyende. Representatives from community-based organizations and farmers who will be involved in the implementation of the project participated in the meeting which also finalized the projects work plan.

Speaking at the inception meeting, Uganda’s Commissioner of Crop Production and Marketing Mr. Alex Lwakuba, observed that the eastern Uganda sub region was prone to hazards of climate change which aggravated food insecurity.

The new project will build on the successes of the first phase of the project that was implemented in 2014-2016 under the theme: “Enhancing adoption of climate smart agriculture practices in Uganda’s farming systems”.

Among them is the Bugiri Primary school where over 700 pupils are involved in the school’s CSA model farm. The farm also contributes to the school’s feeding programms and was part of the site visit conducted by the stakeholders.

The UNDP was represented at the meeting and site visit by Mr. Onesimus Muhwezi, Team Leader, Environment, Climate and Disaster Resilience, and COMESA by the Head of Corporate Communications Mr. Mwangi Gakunga.