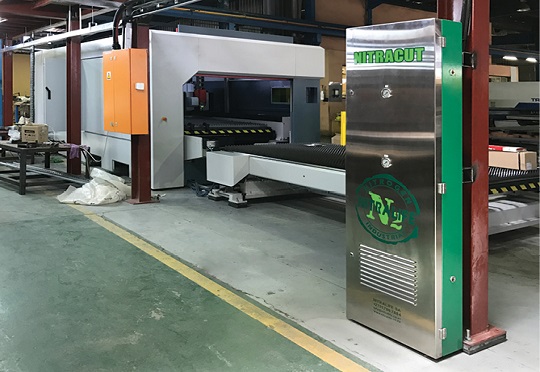 To date, this is the first generator of this type to be exported pan-Africa.

The NitraCut generator is now supplying nitrogen to a Bystronic BySprint Fiber 3015 laser used in steel cutting and fabrication. The BySprint, which Sawpower also purchased from First Cut, is the first fibre laser to be imported into this particular African country and is an encouraging sign that its economy may well be recovering.

Managing Director of NitraLife, Tom Sowry, explains that the requirements which motivated the purchase and importation of this equipment are the price of gas and its actual availability and continuity of supply. “Estimates have the price of gas in many African countries at about four times the price one would pay in South Africa,” says Sowry, adding that the availability of gas in Africa tends to be erratic.

Even where there is a well-established supplier of mainstream gas, when fabrication businesses have gas cylinder bundles as their source of supply, there is always the risk of running out of gas halfway through a cutting operation. Owning or renting a NitraCut generator eliminates this risk.

Owning a state-of-the-art Bystronic laser and NitraCut generator will not only assist the fabricator concerned in its manufacturing; but should also sharply reduce the company’s production costs.

Typically, the world over, steel fabrication follows the steps of cutting, welding and painting. At each of these steps, NitraLife, as a manufacturer of nitrogen generation equipment, has made significant contributions to lowering the cost of fabrication.

“NitraLife was founded in 1996 and, at that time, was the first company in the world to promote the use of nitrogen in tyre inflation. Allied to this was NitraLife’s pioneering development of its own unique nitrogen generator, which allows customers, for a modest initial outlay, to manufacture their own high-purity nitrogen,” he explains.

“However, the boundaries of NitraLife’s operations ambit have expanded beyond tyre inflation and into fabrication. A pivotal development was in 2016 with the development of the NitraCut generator designed specifically to supply nitrogen assist gas to laser steel-cutting equipment. This very successful initiative has allowed fabricators both to reduce the cost of cutting and eliminate the risk of gas run-outs,” he continues.

Nitrogen also has a benefit for the next fabrication step – welding – where the use of nitrogen as a laser assist gas for cutting mild steel, gives a faster and cleaner final cut. This reduces the amount of rework needed to prepare edges for welding.

However, in the final fabrication step of painting, NitraLife is now promoting the use of nitrogen in spray-painting as an alternative to compressed air. Sowry points out that spray-painting with nitrogen gives a superior finish as nitrogen is completely dry, and free of contaminating oil and particles. While this reduces the amount of rework, paint savings are also significant. “We have had reports from spray painters using nitrogen that the savings on paint can be in the order of 10 to 30%, depending on the application” he adds.

“For NitraLife, nitrogen has brought – and continues to bring with it – a number of opportunities to which we are always receptive. With South Africa – and neighbouring sub-Saharan countries – poised for economic recovery and the possibility of increased business, the demand for nitrogen in our various forms of supply is also set to increase. When this happens, NitraLife is ready to play its part in boosting the competitiveness of local and sub-Saharan African fabrication sectors; and thereby driving their resurgent prosperity,” concludes Sowry.