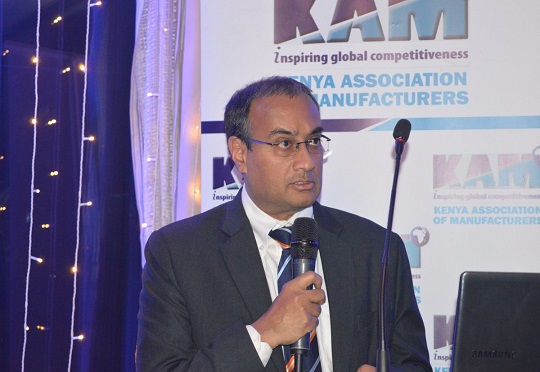 Kenya Association of Manufacturers (KAM) has appointed Sachen Gudka as the new Chairman and Mucai Kunyiha as the Vice Chair to lead the organization for a two-year term.

Mr Gudka, has been the Vice Chair for the past two years,  having served in the KAM Board as a director for 7 years. An internationally trained Economist and Certified accountant, Sachen brings to the organization extensive financial and investment management proficiency, as well as a deep knowledge on cutting edge manufacturing trends from his current position as CEO of both Skanem Interlabels and Rodwell Press Limited.

Speaking at the KAM head office in Nairobi, Mr Gudka said, ‘This is a critical year for the manufacturing sector. We continue to inform critical policy development towards the realization of the Big 4 Agenda, as well as inclusive and broad-based economic growth across the country.

Similarly, advancing the KAM TVET program to build industry skills, will be a key  focus area owing to its role in producing a highly qualified workforce who will employ their knowledge towards developing internationally competitive products for national and global markets.”

The incoming Vice Chair Mucai Kunyiha is a Lawyer and the Group Managing Director of Kzanaka Ltd, which includes Cooper K-Brands Ltd, Analabs Ltd, Mashiara Park and Qaribu Inn.  Mr. Kunyiha has been serving on the KAM Board of Directors for five years and has in the past 5 months led the PET Sector in their endeavour to partner with Government and other stakeholders to manage plastic bottle waste in the country.

Mr Kunyiha noted that addressing East African Community (EAC) matters, would be a key focus area, to ensure older markets are sustained as plans to venture into newer markets in the region, through trade missions, are developed.

“The success of the Big 4 Pillars rest on a thriving manufacturing sector. It is therefore important that we focus on the promotion and nurturing of local industries, mainly by curtailing the current import trend and focusing on reducing our trade deficit as a country. The envisioned growth of 15% contribution to the GDP is possible only if we commit to this,’ said Mr Kunyiha.

Mr Gudka takes over from Flora Mutahi whose two year tenure focused on the fight against illicit trade, providing linkages and subcontracting opportunities for SMEs, founding a Women in Manufacturing caucus and the promotion of exports for economic growth.

Ms Mutahi, who was recently appointed the Chair of the Anti-Counterfeit Agency, will remain an Ex-Officio member of the board, playing an advisory role in directing the growth of the Association.