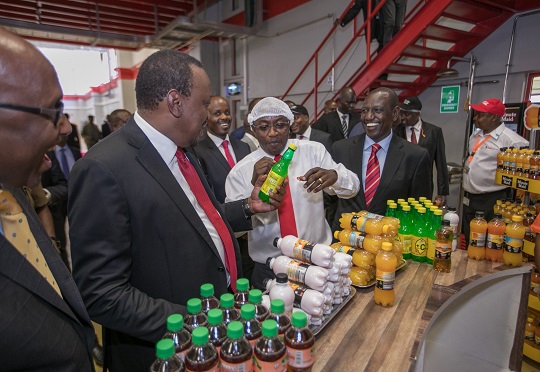 He added that the Big Four Agenda provides solutions to the many problems that Kenyans have longed for answers over the years.

“The Big Four Agenda is our answer to these questions. Kenyans want a country that works for all of us: we want reasonably priced medical care; we want skilled jobs for our sons and daughters; we want to be entirely food secure; and we want dignified jobs for ourselves,” said the President who was accompanied by Deputy President William Ruto.

He added: “The Big Four serves each of those; and it encourages every other Kenyan to do their part in the work of achieving them,”

President Kenyatta said that the CCBA investment is a clear demonstration the government’s priorities had struck a chord in the private sector.

“Like us, you appreciate the importance of jobs, of innovation, and of manufacturing,” he told the CCBA fraternity led by the chairman, Phil Gutsche and the Chief Executive Officer Doug Jackson. Some of the partners traveled all the way from the US

The Hot-fill Juice facility, the latest and first such technology in the region, impacts over 30,000 local farmers during fruit harvest season and over 1500 employees working at the plant.