Behind the constant push and shove as thousands of traders elbow each other while competing with trucks to get their goods cleared at the Kenyan-Ugandan border town of Busia, is a flourishing informal cross border trade that has hitherto remained ignored but now a source of livelihood for millions and a gold mine for both the Kenya and Uganda governments.

It stems from the booming trade between the two East African nations where Uganda remains the largest trading partner for Kenya with Kenya exporting 11.8 per cent of all its products to Uganda.

Uganda’s exports to Kenya on the other hand stands at 17 percent according to the UN COMTRADE database on international trade.

But while Kenya has managed to gazette over 35 entry and exit points, majority in and out Uganda, only recently has it made bold steps to tap into informal traders while protecting women who have traditionally borne the brunt of this informal trading due to their big numbers.

Among the East African community countries, informal cross border trade averages 60 per cent of all businesses with women accounting for 80 per cent of this trade. “The issue of informality in businesses in East Africa cannot be separated from women. It is therefore important to understand where women are coming from, what has informed where they have come from and what they need in order to streamline and trade more conveniently,” said Gloria Atuheirwe the Programme Officer in charge of Women and Trade at TradeMark East Africa which has chaperoned trade between East African partner states and with the rest of the world with focus on access to physical markets and enhanced trade environment.

But to get the women into the formal way of doing business beyond their country borders has been taxing in itself.

Traditionally thousands of the traders, afraid to pay more at the borders would use ungazzeted and sometimes dangerous routes, christened Panya routes, Swahili for rat routes, due to their small size, to get their products to destination. They would use forests and rivers.

Agnes Opus is one such trader.  Since 2005 she has been buying and selling maize and millet between Kenya and Uganda as a way of providing for her four children following the death of her husband who was then the sole breadwinner of the family.

But it has been a tumultuous journey for the 50 year old who was involved in the cat and mouse games with custom officials and police in the formative months of her trade. At times she would cross the river using a makeshift raft and would hire the services of fishermen to help her cross.

Her first encounter with police officers and custom officials was nasty. They chased her, took her bags of millet and all the money she had. “Some of my fellow women traders had it rough if they did not have money. They would be sexually assaulted and others would agree to sex with the officials as a form of bribe,” she said.

When an opportunity presented itself through the Busia Women Cross Border Traders Association she decided to join.

The association, comprising of an estimated 3,000 women traders from Kenya and Uganda, has assisted Agnes formally register herself, acquire a trader’s identity card that makes it easier for her to cross the Busia border without being subjected to too many custom procedures and equipped her to trade from a point of information.

Agnes who is now the Secretary General of the association at the Uganda side and the regional treasurer of the East African Traders Association added has also cemented a cordial relationship with the customs officials she once dreaded has assisted hundreds of women formalize their trade.

On a weekly basis she makes two trips to Kenya where demand for maize and millet is ever rising and is able to earn up to Ksh7, 000, €57, for every market trip. Such proceeds have assisted her pay school fees for her four children, two who are now in university.

Edna Mudibo, a Kenyan trader selling cereals and adding value to groundnuts by making peanut butter has also had her fair share of woes. “I lost count of how many times my goods had been confiscated by the police who nabbed me for using those dubious routes. I would lose all my savings. Even after paying bribes to avoid being arrested, we still feared going through the official border points. The custom officials were mean,” she recalled.

Their experiences are corroborated by a 2007 survey by UN Women that indicated that out of the 60 per cent women informal traders then, 26 per cent were raped as they tried to move their produce across the trade routes predominantly by law enforcers.

A 2013 World Bank report also showed that up to 80 per cent of traders in the Great Lake region paid bribes. The region constitutes countries around a series of lakes in East Africa including Uganda, Kenya, Burundi, Rwanda, Tanzania and Congo.

The Eastern African Sub-regional Support Initiative for the Advancement of Women, EASSI, a body that has been working with the women traders has particularly been instrumental in thawing the frosty relations between custom officials and the traders through dialogue meetings.

“They have been quite a helpful platform. Women are free to air their grievances to custom officials while the officials demystifies the border procedures to the traders,” said Annet Auma, the Busia Border EASSI project assistant.

As a result, Busia has been voted as a model border post in improving the relations between custom officials and the traders according to TradeMark East Africa. 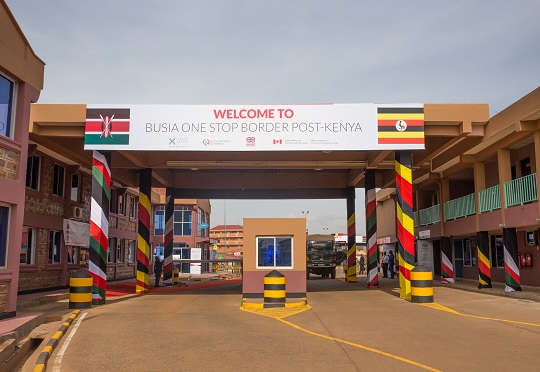 Although there is no actual data on the number of informal traders who cross the Busia border each day, they are averaged to be in their thousands, with 47 per cent of them trading in cereals while 30 per cent are involved in fresh produce.

The fact that a bulk of them trade in cereals has been a major boost to the two East African countries where agriculture contributes 25 per cent to the national economy with 75 per cent of the population drawing a livelihood from the sector.

Millions of people have been able to access cheap agricultural produce that are either in short supply or expensively priced in their respective countries therefore boosting food security. While most of the goods, especially cereals and sugar are cheaper in Uganda, Kenya is primed for its huge consumer demand and a robust purchasing power for these products therefore creating a ready market. “I buy a 90 kilo bag of maize at Ksh1,975, €16, in Uganda and sell it in Kenya at Ksh4, 000, €33,” said Edna.

As a result of heightened campaigns on the importance of the informal traders crossing through designated border routes and forming associations, women traders are now able to easily access more funding and collateral to grow their businesses.

At least 8,000 informal cross border traders in the four major border points of East Africa, Busia, Malaba, Namanga and Taveta have moved from using ungazetted routes to mainstream border posts according to data from TradeMark East Africa. This, providing lessons to countries struggling to tap into such traders with a view to formalizing them.

But while it has been a relatively smooth experience getting traders to embrace formality, taxation in one country, even when goods have already been declared exempt from the other still remains a draw back. Availability of too many undocumented officials at the border who still trick traders and ask for bribes is also discouraging some traders to embrace the posts.

Plans are however in the offing to have a formal Cross Border Trade Charter that spells among others that all border officials must have some identification like a badge, and no male official can conduct a body search on a female trader. The idea is to promote the highest level of accountability and has received a thumbs up from East African Community heads of state.

According to Gloria the informal economy is here to stay since the needs of traders are vast and the sector is dynamic allowing people to respond to opportunities that arise daily. “It is fluid and evolves all too often. We are happy to see countries introducing policies like the common market protocol that recognizes these traders. Our studies indicate that on average one informal trader involved in the cross border business supports seven dependents so you can imagine what this means in terms of policy. We envision a time when informal traders will fully get recognition for the role they are playing in driving inter regional trade,” Gloria said.