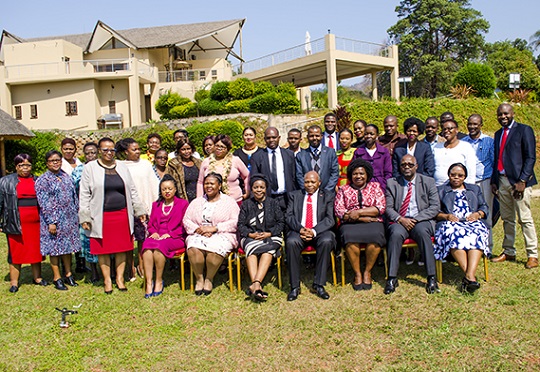 Stakeholders in the Kingdom of Eswatini have welcomed the introduction of the 50 Million African Women Speak (50MWS) project following a two-day workshop conducted by COMESA.

The meeting which was organized in collaboration with the Deputy Prime Minister’s Office - Department of Gender and Family Issues and the Ministry of Commerce Industry and Trade was attended by over 35 stakeholders from the Government, Private Sector, Women Associations and non-governmental Organisation.

Addressing delegates, Deputy Prime Minister of the Kingdom of Eswatini, Honourable Senator Paul Dlamini commended COMESA for mainstreaming gender equality in its projects and programmes and ensuring that women and youth effectively participate in the socio-economic development of the Member States.

He also added that the project was timely and would go a long way in empowering women entrepreneurs in the Kingdom of Eswatini.

“The rolling out of this project is indeed timely. We are living in the digital development era where the majority of our people have access to Information Communication Technologies (ICTs). Studies reveal that more than 95% of the global population lives in an area that is covered by a mobile-cellular network”, he said.

Speaking earlier, COMESA Head of the Delegation, Mrs. Beatrice Hamusonde underscored that the studies conducted separately by the African Development Bank and COMESA revealed that embracing and utilization of ICTs contribute towards lessening some of the gender-specific challenges affecting women entrepreneurs in Africa.

Therefore, the 50 Million African Women Speak, through the creation of a dynamic digital networking platform, will enable women entrepreneurs in Africa to connect with one another in ways that will foster peer-to-peer learning, mentoring and the sharing of information and knowledge within communities.

In Eswatini, more than 90% of the country has a cellular network coverage, with about 60% of Emaswati utilizing the internet. Social media is widely utilized in the country and statistics indicate that in December 2017, the Eswatini had 170, 000 Facebook users.

Therefore, the Government of the Kingdom is optimistic that Women and Youth Entrepreneurs will fully participate in the increasingly mobile and digital based economy to extend their business networks and reach more may people globally.

Commenting on the project, the Chief Executive Officer of the Federation of Eswatini Business Community, Ms. Dudu Nhlengethwa applauded the initiative which she said will offer an opportunity to showcase their products and services as well as networking with counterparts in other regions.

“We are excited about this project, it has the potential to expose the indigenous talent of local women entrepreneur. For a long time, what we can showcase lacked an appropriate and effective mode of being unveiled to Africa and the world. The platform will present us the opportunity to shine and network with other businesses continentally and beyond thus enhancing value chain and competitiveness”, she said.

The objective of the project is to empower women entrepreneurs through providing access to financial and non-financial information relevant to develop and grow their business.