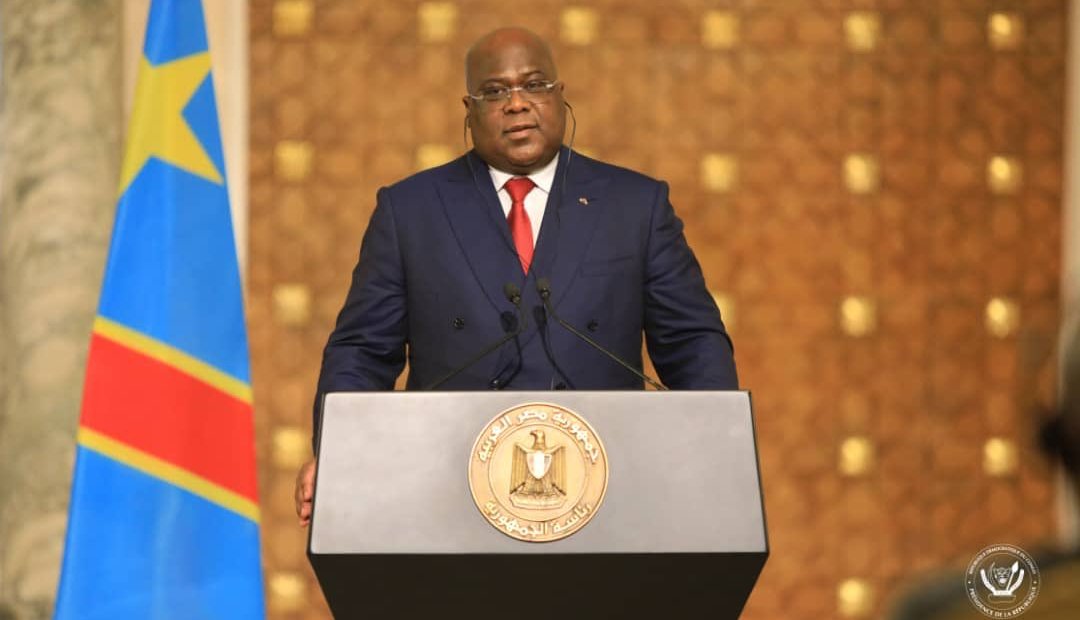 The Heads of State and Government of the African Union (AU) have elected H.E. Felix- Antoine Tshisekedi Tshilombo, President of the Democratic Republic of Congo (DRC), as the new Chairperson of the African Union for the year 2021. The event took place today, Saturday 6 February 2021 during the ongoing Thirty-Fourth (34th) Ordinary Session of the Assembly of the Union, holding virtually under the theme: “Arts, Culture and Heritage: Levers for Building the Africa We Want”.

The President of the RDC is taking over the baton of command from H.E. Cyril Matamela Ramaphosa, President of the Republic of South Africa, who has concluded today his term as the Chairperson of the African Union for the year 2020.

Given the prevailing context of the COVID19 pandemic, the handing over ceremony between the incoming and outgoing Chairs of the African Union was organized in a hybrid mode, both at the Conference Center of the African Union in Addis Ababa, Ethiopia, where the newly elected Chair of the Union, President Tshisekedi was taking part physically, in the solemn handing over ceremony at the podium of the AU Mandela Hall, in the presence of H.E. Moussa Faki Mahamat, Chairperson of the African Union Commission (AUC), while the outgoing Chair Ramaphosa, was taking part virtually all the way from South Africa. Other people in attendance during this highly symbolic moment were the Deputy Chairperson of the AUC, the AU Commissioners and other high officials of the Union as well as the delegation from RDC.

On behalf of the outgoing President of the Union, the symbols of the Union were presented physically to the incoming Chair by the AUC Chairperson, Moussa Faki Mahamat, while the flag of the African Union was handed over virtually by the South African President, H.E Cyril Ramaphosa.

The composition of the new bureau of the Assembly of the Heads of State and Government of the African Union for 2021 was thereafter presented as follows:

In his handing over speech, President Ramaphosa wished the new AU Chairperson, a successful Chairmanship and thanked the Heads of States of AU Member States as well as the AU outgoing bureau, for their support during the tenure of his mandate which he said, was marked by the prevailing sanitary crisis caused by the COVID19 pandemic. President Ramaphosa highlighted some of the achievements under his chairmanship of the Union notably, the efforts to reduce conflict in the continent under the theme of silencing the guns; the economic empowerment of the women and youths, the enhancement of democracy and good governance, among other development programs under Agenda 2063.

The outgoing Chair of the Union further underlined the initiatives undertaken under his leadership to address the challenges of the COVID-19 pandemic. These include: the establishment of the Africa Task Force for Coronavirus (AFTCOR); the Partnership to Accelerate COVID-19 Testing in Africa (PACT); the Consortium for COVID-19 Clinical Vaccine Trials (CONCVACT); the appointment of Special Envoys to mobilise the international support for the continental fight against COVID-19; the establishment of the African Medical Supplies Platform (AMSP): a platform developed to assist the AU Member States to tackle issues on the supply side of continent’s response to COVID-19 and access to medical supplies and equipment; the development of the vaccine strategy for the continent which was endorsed by the AU Bureau of Assembly; the establishment of the COVID-19 African Vaccine Acquisition Task Team (AVATT), in support of Africa vaccine strategy with the objective that no country and no one should be left behind; and the initiative to engage international partners and financial institutions to support countries whose economies have been devastated by the pandemic.

Outgoing Chairperson Ramaphosa however noted with satisfaction the fact that when the AU COVID-19 Response Fund was launched, the first contributions came from the AU Member States which was a demonstration of “the African ideals of unity and solidarity to fulfil our common objectives”.

In his acceptance speech, President Tshisekedi said it is a unique privilege for the Democratic Republic of the Congo be given this opportunity as Chair of the African Union at a symbolic and highly significant moment when “we are celebrating the sixty years of the disappearance of a worthy son of the Congo and Africa, Mr. Patrice Émery Lumumba, who strongly believed in the great destiny of Africa. He did not hesitate to organize, in August 1960 in Kinshasa, then Leopoldville, the last Congress in the history of the great movement of Pan-Africanism. On June 30, 1960, shortly before his tragic death, he declared [I quote]: "Africa will write its own history and it will be in the north and south of the Sahara, a history of glory and dignity". [End of quote].”

The incoming Chair of the Union commended President Cyril Ramaphosa, who, in difficult conditions due to the Covid-19 pandemic, was able to mobilize the efforts of all the countries of the continent and partners to face this challenging moment. He also thanked Her Excellency Sahle-Work Zewde, President of the Federal Democratic Republic of Ethiopia and His Excellency Mr. Abiy Ahmed, Prime Minister, for the warm welcome that the Ethiopian people have never ceased to give AU Member States “during our meetings at the headquarters of the organization”, before expressing his sincere thanks to Mr. Moussa Faki Mahamat, Chairperson of the AU Commission for welcoming him “in this magnificent setting of the headquarters of our continental organization”.

Highlighting the theme of the year 2021, the new AU Chairperson Tshisekedi said, Arts, Culture and Heritage constitute the foundation of the African renaissance and offers the opportunity for Africans to return to our roots. “Culture is indeed, as Léopold Sédar Senghor said, at the beginning and at the end of everything, because it embraces all areas of life).

About the African Union:

The AU Vision is to accelerate progress towards an integrated, prosperous and inclusive Africa, at peace with itself, playing a dynamic role in the continental and global arena, effectively driven by an accountable, efficient and responsive Commission.

As the world struggles with the reality of climate change and calls for businesses to operate as responsible corporate citizens in everything that they do, ESG reporting has become a key pillar of resilient and responsible markets ...read full column here

Technology has transformed every aspect of our personal and professional lives, and has left no sector of the economy untouched ...read full column here

[Column] Mark Dankworth: Africa leads the way in mobile money, will change banking as we know it

Mobile transacting is fast becoming the golden egg of financial services – and nowhere more so than in Africa ...read full column here

Kenneth Munyi is the Managing Director at Echo Kenya. The cloud-based ICT company recently entered the Kenyan market and to mark its entry into it announced the launch of its ‘Superwan’ offering, a software-defined network … read full interview here.

InnoFaso is an agrifood company based in Burkina Faso whose mission is to meet the country's needs in the treatment and prevention of malnutrition. InnoFaso was recently recognized by the UN … read full interview here.