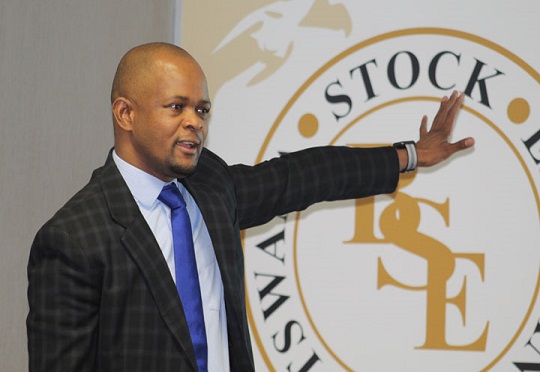 Citizen owned companies have been urged to spread the risk of ownership among a large group of shareholders through availing shares publicly and having their stock listed on the stock exchange.

Speaking during the Botswana Stock Exchange (BSE) opening bell ceremony that signifies the beginning of the trading day on the trading floor, BSE chief executive officer Mr. Thapelo Tsheole stated that going public and offering stock in an initial public offering represented a milestone for most privately owned companies.

He said spreading the risk of ownership was especially important when a company grew with the original shareholders wanting to cash in some of their profits while still retaining a percentage of the company.

He pleaded with local entrepreneurs to familiarize themselves with the stock exchange technicalities in order to tap into the benefits of listing, citing that with knowledge on the importance of listing, local entrepreneurs would appreciate that it provided an opportunity to raise capital to fund new projects and diversify business interests.

The citizens were educated that taking a company public reduced the cost of capital and gave the company a more solid standing when negotiating interest rates with banks, hence reducing interest on existing debt the company might have, and that citizen owned businesses, dominate the business landscape across both developed and developing economies and are major contributors to employment creation and the GDP, accounting to over 50 per cent.

Mr. Tsheole said that P1.2 billion had been traded and an average daily turnover of about P6.7 million was experienced, which was lower compared to P11.5 million experienced last year.  He explained that one of the contributing factors to the lower turnover this year was the Botswana Public Officers Pension Fund (BPOPF) tender to realign and reissue mandates.

There has been an improvement on the bonds market as BSE traded P268 million last year compared to P1.3 billion traded this year so far.