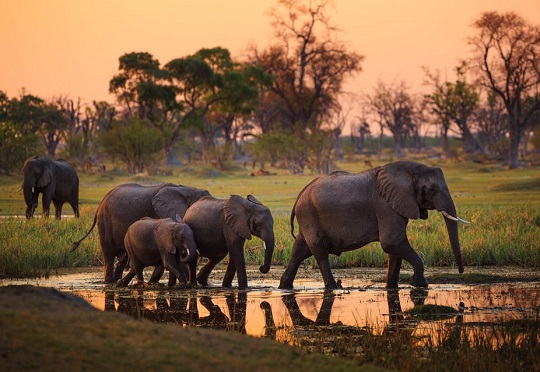 It’s one of the world’s last sanctuaries for African elephants. But now, Botswana says, its population of the animals will be fair game for hunters.

The southern African nation, which is home to 130,000 elephants — more than anywhere else on the continent — imposed the ban in 2014 to help declining numbers recover from poaching and shrinking habitats.

Late on Wednesday, Botswana’s government scrapped the ban, shrugging off criticism from some environmental groups and conservationists. It cited increasing conflict between humans and elephants, as well as the need to monetize conservation efforts.

“Conservation is in our DNA. We have never been reckless. Our responsibility towards conservation has not changed, but our responsibility to the people has not changed as well,” said Kitso Mokaila, minister of environment, wildlife and tourism in a press conference on Thursday in the capital, Gaborone. He maintained the ban had always been temporary.

Earlier this year a cabinet group in Botswana recommended elephant culling and a factory to can elephant meat. The proposals drew a major backlash.

“That was a trial balloon, clearly,” said Derick Joubert, a well-known conservationist and filmmaker, adding: “This was always going to be about hunting.”

Scores of people are killed or injured by elephants each year in Botswana as humans encroach on wild spaces. But several conservationists and wildlife groups, some of whom did not wish to go on record, said they doubt hunting will help.

“If it is all about community and wildlife conflict, there are dozens and dozens of options that can be used before one hauls out the guns,” Joubert told CNN. “Many people would be willing to put up a lot of money and ideas to help communities before we resort to the killing of animals.”

The African elephant is classified as vulnerable on the International Union for Conservation of Nature’s (IUCN) Red List. The first Great Elephant Census, a pan-African survey conducted in 2016, revealed that in just seven years between 2007 and 2014 elephant numbers plummeted by at least 30%, or 144,000.

But hunting for big game, including elephants, is common practice in the neighboring countries of southern Africa. The governments of Namibia, Zimbabwe, Zambia and South Africa assert that well-managed hunting can help preserve the herds by channeling profits into conservation, and protect ecosystems from the destructive power of large elephant populations.

There is an ongoing debate about the actual worth of hunting licenses compared to tourism dollars. The Botswanan government said it would grant up to 400 licenses per year for shooting elephants.

Many scientists and conservationists also feel that protecting elephants is a moral imperative.

Multiple studies show that elephants are highly intelligent, sentient creatures that are aware of what happens in their environment, and express fear and stress when other members of their species are killed.

“Hunting is an outdated practice which has no place in the modern world,” Kenyan wildlife conservationist Paula Kahumbu told CNN.

Hunters prefer the biggest bulls, with the largest tusks.

That can skew sex distribution and affect elephant ecology, knocking out the strongest and most knowledgeable of the species out of the gene pool.

But the same experts say, with correct management, hunting alone will not drive the species to extinction. Douglas-Hamilton told CNN that if the practice is properly managed, overall numbers of elephants aren’t affected.

Poaching, however, could wipe out populations. And in some parts of the continent, it already has.

Right now, the sale of ivory is banned by an international agreement on trade in endangered species.

But Botswana, Namibia, Zambia, and Zimbabwe, with the support of South Africa, are making a fresh appeal to lift restrictions on the sale of raw ivory.

Those countries account for more than half of the world’s elephants and have millions of dollars’ worth of stockpiles that they say could be sold and plowed back into conservation.

Several weeks ago, as they discussed lobbying against the ivory ban at a summit in Botswana, the host government presented the visiting leaders with elephant feet stools.

It was an odd gift for a country trying to push its conservation credentials.

But it also points to a shift under President Mokgweetsi Masisi, who has taken a markedly different stance on conservation and hunting than his predecessor.

Both Kahumbu and Douglas-Hamilton said they fear the decision on hunting is a step towards opening up the ivory trade — something that conservations widely agree does drive poaching, and ultimately, extinction.

And poaching is already on the rise in the country once considered a model wildlife haven.

Nearly 90 elephant carcasses were found during an aerial survey in the north of the country, compared with nine during the previous audit of the region in 2014, it found.

The study was largely funded by Botswana’s Department of Wildlife and National Parks. But the government criticized the report’s methodology, claiming that it in fact showed that elephant numbers were ‘stable.’

The minister of environment, Mokaila, said that Botswana is being punished and unfairly criticized for their sound wildlife management. And they have hired a New York-based PR firm to help make their case.

“Why are we being punished for our success in conservation. And why are we continuing to be punished for coming up with solutions?” he asked.

CNN's Chandler Thornton in Atlanta contributed to this report.