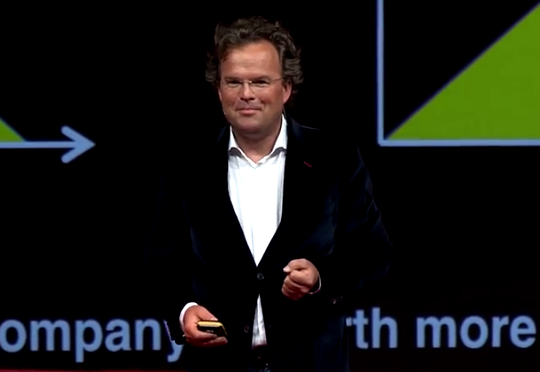 Thierry Sanders: Are African banks ready for the challenges ahead?

Life for African banks has been relatively easy. Treasury bills provide a high return for little effort. Western capital is getting very low rates at home, and is seeking out higher rates in Africa.

So if your bank is solid, and you have guarantees and currency hedging available, then your work shouldn’t be tough.

But there are new winds blowing.

And from abroad… befriended banks will get stricter as foreign financiers prepare to meet with Basel3 regulations.

This TEDx talk on the future of banking looks into these challenges, innovations and highlights an example from Indonesia.

Thierry Sanders is founder of bidx and CEO of Mekar

TEDx talk on alternatives for banking. Alternatives that are financing high growth businesses and creating jobs.

The beating of our heart is always there, it is predictable.
Every second, every minute, of every hour, of every day.
It keeps beating, year in year out. Our lives depend on it.

Before the 17th century doctors thought the human heart was a fountain — they thought it was the source of blood itself.

But in 1625, Medicine took a giant leap when, William Harvey, a British physician, re-described the heart as a pump.

The heart is a pump whose job is not to create blood, but to pump it to all parts of our body.

Banks are like the heart — their job is not to create money.
Their job is to pump money throughout the entire economy.
The problem is that they are pumping less and less money to the real economy.
It’s time to change this!

The good news is that whether the banks, the investment banks or the central banks like it or not — there is a new wave of innovation already underway that is going to transform the financial system.

Bill Gates summed it up nicely: “Banking is essential, but banks are not”.

We need an alternative to the current banks, we need something better which works as predictably as a heart, and like a heart, can pump money to ALL parts of the economy, including the real economy of farms, shops, startups, factories, schools and hospitals.
And I especially believe that we need a system that is designed so that money can flow to where jobs are created.

I will share these alternatives with you, and will share with you my plans on how I am building a new alternative for a bank that does create jobs, in Indonesia.

But before doing so, I want to explain how I got to this through my own meandering and personal experience.

This is my father. My father was a banker. Luckily he retired on time.

He had a great job, because until I was 18 years old he took me to exotic places like Ecuador Paraguay, Pakistan, Saudi Arabia, Madrid and Paris. We just about moved every 1.5 years.

One of the most exciting memories of growing up was visiting the companies that my father did business with.
He took me to a cement factory in Saudi Arabia, to an oil palm plantation in the Amazon of Ecuador and even better was our visit to a Sweet factory in Karachi, Pakistan.
It was fascinating to see the how things are made.

But what struck me was how clean and organized things were in these factories. Yet outside the gates there was the chaos of traffic, hundreds of stores, street vendors, slums and thousands of people bustling around.

As a child of 10 years old, it seemed strange … and somehow unfair.

I asked, “Daddy, why aren’t you giving money to the shops and people outside the factory? There is not much ‘busy-ness’ at the factory, but there’s a lot of ‘busy-ness’ outside. There are many more stores out there, and you will help many more people.”

His answer was simple, “It’s a lot of hassle”.
I didn’t truly understand what he meant till 15 years later.

Under my skin I felt a discomfort, a nagging feeling that didn’t leave me.
I went to study economics, tried working at a bank and went back to research the plantation in the Ecuadorian Amazon.

Then in 1995 I decided it was time to start my own business.
It was an exciting year, because it was the first year you could put a page of text on something called the World Wide Web, so that other nerds could find your page and read it.

I decided to start a simple dating website.
It was a dating site for investor and for entrepreneurs seeking finance.
The common characteristic of all the entrepreneurs was that they had all been rejected by banks.
Their business was too risky; they didn’t have the 120% collateral; or the entrepreneurs were young and inexperienced.

A friend of mine, Pedro Moura Costa, called me. He had started the world’s first carbon trading company. He had hundreds of carbon projects that needed finance.

Solar projects, forestry and many more.

So he asked me to help him find finance for the projects, and to help him bring his company to the London stock exchange. We did both.

As I looked through the projects, it was clear that the banks and funds all wanted to finance the multi million dollar projects, and they wouldn’t touch the projects needing less than 1 million.

This “transaction cost” issue is one of the main reasons why banks prefer to fund big and not small businesses. And is also why my father said that the shops in Pakistan were a “hassle” to finance.

But there is a second problem, which became clear to me.

If you work at an investment fund, and you are looking to invest in one of these two businesses. Which one would you choose?

Company B automatically seems the better investment opportunity.
Clearly Company B is where the long term jobs and market opportunity lies.

But no, an investor seeking quick returns will invest in Company A.
The financial sector prefers money in their hands today, not in the future. By all banking standards, using IRR and NPV, Company A is worth about 60% more today, than Company B. You can even lay off staff and sell assets making Company A even more attractive.
In this way zero-risk and efficiency investments will always win over ‘ long term and new market breakthroughs’.

This may seem very obvious and trivial, but the consequence of this “transaction cost” and “short term returns” issue is dramatic. It affects every investment decision in the financial sector.

The impact is like an epidemic…
…especially if you look at where jobs come from in an economy….

Where do jobs come from?

All net new jobs in the USA over the last 22 years were created by companies less than 6 years old.

From the data in the United States over the last 22 years, you see that ALL net new jobs are being created by companies that are less than 6 years old. The word NET new job means, all new jobs created that year, minus all jobs destroyed in that same year.
The graph shows that companies older than 5 years, tend to fire staff, to become more efficient, to be come more profitable — for the shareholders.
Yet it is those older companies, which are getting most of the finance from banks and investment banks.

Now, you may think that over many years the larger companies create most jobs. But if you look at companies over many years, we see that 90% of all net new jobs are created by only 3% of businesses. Yes 3% of companies create 90% of jobs. And this is in almost all countries, not just the USA. These are smallish companies that are able to grow their sales by about 20% per year for multiple years. These companies are called “Gazelles”. They grow fast, they have little cash; they have trouble getting bank loans; yet they have survived their first 4 years. They are not well known businesses, but SOME eventually grow into an IKEA, a Tata or a Google.

I got frustrated because of the huge impact of this financial bias against growth businesses & job creation.

So 10 years ago I decided to launch a global business plan competition using a web-platform. My goal was to connect investors and coaches with high growth entrepreneurs. Over the 10 years I am proud to say that with a small organization BiD Network and the web-platform www.bidx.net we managed to help start, grow and finance 1000 businesses, and create over 7000 jobs.

Today bidx.net continues to connect entrepreneurs and investors in over 90 countries, but we need something bigger, a real alternative for banks.

Meanwhile, I started looking into more scalable options. And that is what made me optimistic.

The good news is that alternatives for banks are being built as we speak.

As an indication of the size of this innovation:

Somewhere in this broth of innovations, lies the recipe for an alternative banking system. It is this new combination of building blocks that is the last part of my story.

A couple of years ago I met the Indonesian entrepreneur, philanthropist and billionaire: Putera Sampoerna.

We both share the common passion for getting more finance to growth businesses, in order to create jobs.

Sampoerna said, “Lets create an alternative for these banking dinousaurs. We need a system which is truly useful for the 55 million small and medium sized businesses in Indonesia. This alternative should allow middle class Indonesians to invest in the development of the entrepreneurial lower middle classes. And if it works let’s offer it to other countries”.

We walked, talked and brainstormed until we got the right mix of ingredients to take our ambitions to scale.

Our alternative is called “Mekar”, which means “to blossom” in Indonesian.

We will provide them with smartphones to do the loan applications and create bank accounts for the borrowers.
We won’t take collateral, like someone’s house or car. But we will use advanced credit scoring, like psychological tests and use family guarantees to secure our loans.
Mekar’s agents will visit the borrowers, and ask them which other services they may need like insurance, savings, education, or more.

By have small-offices but big-data; and few staff but thousands of agents; and no branches but a nationwide mobile network, we will have lower costs than banks. We will charge less to the borrowers, and offer more to our funders.

Mekar’s funders will be middle class Indonesians, but also Venture capital and banks are welcome to fund the borrowers. You, are also welcome!
You won’t be able to pick individual borrowers, but you can configure your preferences: for example, a woman-run business, in textile, on Sumatra, needing less than 50,000 dollars. Your preference will tell the agents what to look for.
You will be able to track and trace how your money is being used and what commissions are being earned.

Mekar, is like a heart, we are building a small but powerful pump to accelerate the circulation of money to where it is needed. To where jobs are being created.

Putera Sampoerna and our team aim to introduce Mekar not just in Indonesia, we aim to bring it to your country, so that you can participate.

Together we can start a movement that uses the income inequality that is present in all countries, to enable the wealthiest 10% to finance the 90%.

Let’s get money to flow to where it can create jobs.