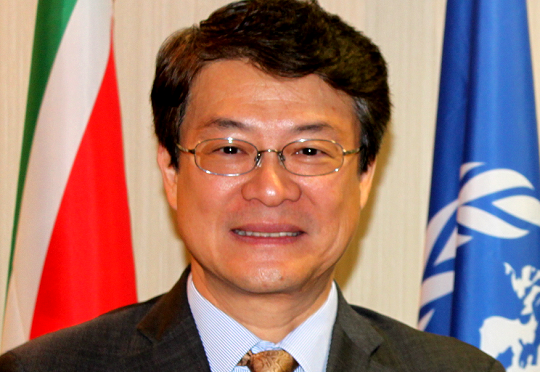 Dr. Stanley Ko is a Singaporean entrepreneur, business development strategist, and Founder of Albarka Africa Investments. He has worked for many years in Africa, namely Nigeria and South Africa, in various directorial capacities. He currently resides in Johannesburg, South Africa.

His interview with Africa Business Communities:

I am a strong believer of Africa and fully endorse the philosophies of South-South Cooperation. Having lived and worked in Africa for so many years and having built up a network of business friends in Asia, I am convinced that I am able to bridge Asia's wealth of technology and capital with Africa's need and opportunities. While many people are paying lip-service, I act. Albarka is created as an Africa-focused organisation that principally supports developmental phase of greenfield projects. The name "Albarka" means "blessings" in Hausa and I am dedicating the creation of this company to my previous boss, Alhaji Aliko Dangote. I was blessed enough to work with this remarkable business giant and have learned from him a lot about business aptitude.

In which industries does Albarka operate?

I have been developing business for a large part of my professional life and enjoy doing it.  Very often I come across people who own a prospecting license or a great business idea but have no clue how to bring the project into the development phase and eventually into the operational stage. They are either short of knowledge or capital to realize these projects.  Albarka is able to help. For the moment, we are focusing on mining, manufacturing industries and agriculture.

Do you have other professional commitments, apart from running Albarka Africa?

IOSSC Sustainable Development Africa Investment Fund was created by several Chinese shareholders. For various reasons, it is being voluntarily liquidated. During the year of its existence, I had the privilege to meet many entrepreneurs and bankers. I saw the closure of IOSSC Africa Investment Fund as an opportunity for me to offer my expertise to Africa. Within a short time of starting out, I have been approached by business friends who helped me to start a few other firms. Nguvu Industries is developing a manufacturing business, Dugong Consultants offer advisory services in Mozambique, and Nizu Assets develops trade and investments in South Africa.

You have worked in the two largest economies in Africa – Nigeria and South Africa. What can you say about doing business in these countries?

Nigeria has a large population and its population is more homogeneous. Due to the large population, people have to compete. There if you don't work, you don't eat.  On the other hand, South Africa has a history of apartheid, a smaller population where people strike to get themselves heard or to demand a raise. Nigeria has an industrial population that is always thinking of how to make money, while in South Africa, workers are always thinking of the "right" to get more. Students in Nigeria compete to get into universities. In South Africa, there is a lower passing average mark in schools and a quota to get marginally good students to universities. So there are two different cultures. The only thing South Africa has today is the infrastructures, and provided the infrastructures are properly maintained and developed, business can still be attracted to the country.  But with the over enthusiastic labor unions and constant regulatory changes, business people are weighing between an improving infrastructure and the dynamics of a crumbling input environment.

What does the election of Muhamadu Buhari mean for doing business in Nigeria, in your opinion?

I have always admired the Nigerian people.When President Buhari was elected into power, it was done so peacefully and transparently. Nigeria has really matured as a country and as a democracy. People respect the formal institutions and so it does not really matter who has become President. The eagerness of the Nigerian people to have a better life will spur them to work hard. It is great to note that during his inauguration, President Buhari promised to supercharge the country's economy and speed up infrastructure developments to unlock value chains. It is going to be great for business in Nigeria.

What, in your opinion, can be done by entrepreneurs and governments to stimulate the business environment in Africa?

An example of what governments need to do to stimulate the business environment is to look at what Rwanda, Namibia, Botswana, Ghana, Nigeria, and Mozambique have done.  Streamline business entries, reduce conflicts and ensure peace in the country, where workers and business owners work together and where government is not seen as working against businesses. Without profits, nothing is sustainable. Entrepreneurs will always appear at any place they can make money when the environment is working for him and not against him.

Do you believe Social Media and the Internet to be a plus to the business environment, as it applies to your industry?

Of course. Social Media and the Internet are essential tools in today's businesses, and especially so in Africa. The internet is revolutionizing the way people live and work. It transcends the physical constraints in the continent which is still developing its infrastructure. It brings supply and demand closer ever so efficiently and economically.

What expectations do you have for South Africa's economy in 2015?

I live in South Africa and I can say that the South African people are friendly and always find a reason to laugh. We have great political institutions. On its economy, unless drastic change can take place in the labor unions, in reducing crime and in government policies, I am afraid 2015 may not be remarkable.

Which African countries will perform best in 2015?

Nigeria - smooth transition and hungry people who are willing to work even harder.

Africa Business Communities is conducting a series of interviews with high-end professionals in Africa. Are you interested in an interview? Please send an e-mail to Andrea Ayemoba at andrea@africabusinesscommunities.com