The euro found strong resistance around the 1.20 level versus the US dollar yesterday, before ending the trading session sharply lower following some contrasting economic news between the US and Euro Area.

The common currency had started the day off strongly, rising to its highest position versus the greenback since May 2018, having very briefly broken through the key psychological 1.20 mark.

Investor appetite for the currency was, however, sapped following the release of yesterday’s disappointing German PMI numbers and Euro Area inflation figures. The latter will be of particular cause for concern for the European Central Bank.

Headline inflation sank below zero year-on-year for the first time in four years, despite the host of stimulus measures recently launched by the ECB, while the core measure declined to just 0.4% – its lowest level on record.

A strong euro and expected increase in future unemployment suggest further downward pressure on prices is likely in the coming months. 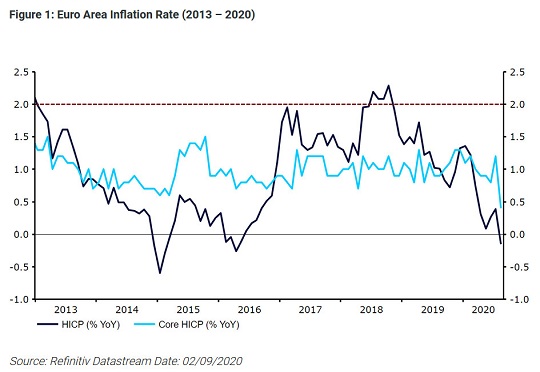 An increase in new coronavirus cases in Europe is also beginning to concern investors. Spain undoubtedly appears at the epicentre of the flare-up, with new cases there leaping back above 8,000 yesterday for the first time since the peak of the crisis on 23rd March, according to worldometers.

This has raised concerns surrounding the possibility of a second wave of infection and the possible re-introduction of lockdown measures. Spain’s health minister ruled out the return to the draconian measures imposed at the beginning of the pandemic.

Yet with schools set to return this week the reimposition of at least some measures may be required in order to halt the virus’ spread. This undoubtedly presents itself as somewhat of a downside risk to the euro, in our view.

Across the Atlantic, data out of the US economy was unexpectedly strong. Manufacturing data from ISM beat expectations, with the index rising to 56 in August from 54.2 a month prior – its highest level since November 2018.

Given the recent surge in US virus cases and prolonged shutdown measures imposed in the country, this caught investors by complete surprise and bodes well for the more meaningful services index, set for release on Thursday.

As for sterling, the UK’s manufacturing PMI from Markit was also released on Tuesday, although this came in more-or-less unrevised.

The UK currency instead traded mostly in lockstep with the euro and is currently trading roughly where it was at the beginning of the week, having briefly extended its gains to its strongest position since December’s general election yesterday morning.

Focus today will be firmly on Bank of England Governor Andrew Bailey, who will be delivering a mid-week speech alongside a handful of his MPC colleagues at the annual meeting of the Central Bank Research Association. Investors will also have one eye on tomorrow’s revised UK services PMI for August.

Matthew Ryan is a Senior Market Analyst at Ebury