An upsurge in cases of malnutrition among children in rural Tanzania, combined with the issue of poor markets for farmers, inspired Jolenta Joseph to venture into the nutrition business in 2017.

Her enterprise, Sanavita, started out by selling orange-fleshed sweet potatoes (OFSP) to consumers but has evolved over time to add value to OFSP, beans and maize.

With Tanzania’s staple food crop, maize, constantly being ravaged by pests, diseases and erratic weather, in 2002, the International Potato Centre introduced OFSP as an alternative option for farmers. The crop initially enjoyed massive uptake due to its fast-maturing rate, taking just three to four months to harvest, and being less susceptible to pests and diseases compared to maize. But as more farmers took up OFSP cultivation, the markets became saturated, and making a profit became increasingly difficult for farmers.

As part of her BSc degree in human nutrition with the Sokoine University of Agriculture, Joseph was working on a nutrition awareness programme in 2017. Her interactions with farmers presented an opportunity: “I noticed the large swathes of land under OFSP production and the farmers’ struggle in getting their produce to market. That became my light bulb moment,” she says. She purchased some of the farmers’ crop and sold the tubers to her friends on Facebook and WhatsApp. The huge demand inspired her to pursue a more elaborate business. She approached 10 farmers who agreed to supply her with OFSP, on the condition that she would provide a consistent and ready market. With a steady supply, Sanavita became an officially registered enterprise, based in Morogoro, a town in Eastern Tanzania, in 2019. 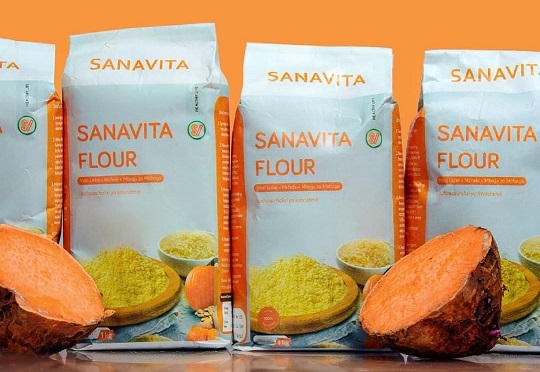 Scaling up with added value

From the initial 10 farmers, she now works with more than 1,000 who supply her with up to 5 tonnes of OFSP every month for processing into flour. But while the potatoes remain her company’s flagship product, she has also ventured into the purchase and value addition of pro-vitamin A maize, which has a higher beta carotene level than the potatoes and is high in iron. She processes this, as well as zinc-fortified beans, into composite flour for porridge.

In search of a production area, Joseph was lucky to be accepted by the Sokoine University Graduate Entrepreneurs Cooperative (SUGECO), an agriculture incubator which allowed Sanavita access to milling machines and laboratory services at a subsidized rate. SUGECO also provides Sanavita with access to a laboratory where they are able to conduct analysis on all value-added products before releasing them to the market. This enables Joseph to ensure food safety and the optimum nutrition composition of her products.

For the OFSP, once received from the field, the crop is placed under solar dryers to ensure minimal nutrient loss. According to Joseph, drying the sweet potatoes directly in the sun makes them lose 80 percent of beta carotene, which contains the crucial vitamin A. In comparison, placing them on solar dryers means they lose about 20 percent, and also increases their shelf life for up to six months. Over the last year, the company has managed to grow its product portfolio to OFSP puree, bread, flour, soya flour, pumpkin seeds flour and pro vitamin A flour.

While her primary target market is vulnerable groups, including children between the age of one and five, pregnant women and lactating mothers, her products are also available to the mass market – through supermarkets and retail stores. These outlets, which are based in Mogorogo, attract customers from as far as Dar es Salaam, the economic capital of Tanzania. So far, Sanavita products have reached up to 10,000 customers.

To help spread the message of the importance of bio-fortified food consumption, Sanavita runs nutrition awareness campaigns via local radio, TV stations and social media platforms. This is complemented by nutrition education in schools and regular visits to clinics, where Jospeh and her team interact with pregnant mothers and encourage them to consume the OFSP to boost their iron levels. So far, the company has been able to reach 20,000 community members through this approach.

A double award in nutrition

As winner of the 2020 SUN Pitch Competition Food Technology Innovation Prize, awarded by the Global Alliance for Improved Nutrition (GAIN), and the mentorship prize from AGREA, a Philippine-based social enterprise working on sustainable farming, Joseph says the journey of training, mentorship and winning has been monumental in shaping her business and informing her expansion plans.

“From the SUN national competition in 2018, where government officers visited our business, to the global competition where we were exposed to intensive training on business and financial management and networking, I have had the chance to understand my business from a global perspective. My focus previously had been too local. The exposure provided me with food for thought on a market gap that I could address, not just in Morogoro but across Tanzania, and maybe the entire East African region,” Joseph enthuses.

She is looking forward to the AGREA mentorship, which she says her company needs as she moves into expanding and establishing her own production facility. Joseph explains this development would not have been possible without the GAIN US$10,000 cash prize.