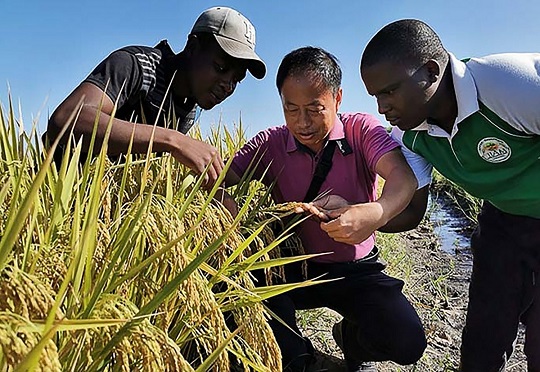 "Bowen and Ruoyu, today is a happy day for you. I am very excited, but also deeply sorry. I am now in Burundi and cannot travel due to the COVID-19 pandemic, so cannot join you on the special occasion. But I believe our hearts are always connected, and we always stand together!" said the groom's father Yang Huade via a video.

As head of an agricultural expert team from China to assist Burundi, Yang has been staying in Burundi for six years. Because of the mission, he could not return home to attend his son's wedding. "Even so, my family has shown full understanding to me," Yang told ChinAfrica.

Yang, 57, has worked with the Agricultural and Rural Bureau of Weiyuan County for 38 years. In 2015, he set foot on the African continent for the first time, teaching rice cultivation skills to locals in Mozambique. After successfully completing his mission, he participated in an agricultural cooperation project in Burundi and worked there as a leader of an eight-person expert team from China.

The Chinese experts mainly assisted Burundi in formulating agricultural industry policy planning, providing consultation and conducting experiments, demonstrations and technical training. According to Yang, Burundi is located near the equator and is rich in sunshine and water resources. However, the agricultural infrastructure and equipment are backward with few professional agricultural technicians.

Meanwhile, they drew up a technical protocol for hybrid rice cultivation, which could solve the problems such as low production capacity of varieties, poor quality of seedlings, and irregular cultivation. Through the pilot cultivation, the average yield of rice reached more than 10 tons per hectare, exceeding the local average yield by more than three times.

In addition, the team was also committed to improving the legal validation of varieties and the registration of important production materials. "With the strong support of the Burundian government, we completed the first national validation registration of Chinese hybrid rice in Africa, introduced rice herbicides and completed the trials, demonstration and environmental impact and safety assessment work related to the registration. It not only protects the environment, but also increases production and income of the local people significantly," Yang said.

It is for this reason that the success of the hybrid rice project was listed as a major achievement of Burundi in 2018, and the rice experts and soil fertilizer experts in the team were awarded the outstanding contribution award by the Burundian Government.

On the World Food Day on October 23, 2020, Burundian President Évariste Ndayishimiye spoke highly of China-Burundi agricultural cooperation in a speech. He said that over the years, a number of friendly countries and world organizations have supported the revitalization of Burundi's agriculture. He added that Burundi is especially grateful to China for actively helping with its economic and social development.

Irankunda Ernest is a young farmer in Ninga Village Four. In 2018, he was selected to be trained by the Chinese expert team as a farmer technician. But at that time, Ernest received an offer from the University of Burundi's School of Economics and Management.

"His friends and family were happy for him, but he wanted to give up his university studies and learn hybrid rice cultivation technology and agricultural management experience from us, aspiring to become a real rice expert," Yang recalled.

Under the guidance of the expert team, Ernest learnt a lot. By May 2020, he and his folks had planted three seasons of hybrid rice, significantly improving production and living conditions. "After six months of rice cultivation practice, the village set a record for rice production and efficiency," Yang said.

As a result, Ernest was awarded the two-year certificate of completion by the Chinese expert team and was qualified as an agronomist in the field of rice cultivation. He was then appointed as the technical leader of a hybrid rice demonstration site in Cibitoke Province. Half a year later, the rice yield at the demonstration site increased from 2.5 tons per hectare to 7.5 tons. Nowadays, Ernest has become an authority on rice development in the province.

The success has attracted the attention of the Burundian government. "In November 2019, the Burundian Government selected 17 young farmers across the country to receive six months of training with the expert team. Among them are people who have returned after studying abroad as well as outstanding members of the ruling party, and they have become an important backbone of Burundi's hybrid rice development after completing their studies," Yang said.

On December 28, 2020, a new batch of Chinese experts arrived in Burundi. Yang and his team members soon joined the new team and continued their work.

Talking about the next steps of the assistance mission, Yang is full of confidence. "We are ready to continue to focus on technology demonstration and extension work to improve food production and economic efficiency, so that more people can profit from China-Burundi agricultural cooperation," Yang said. According to him, more hybrid rice planting demonstration sites will be built in 12 villages, which covers more than 2,000 hectares. Their goal is to plant 15,000 hectares of rice throughout Burundi. Meanwhile, the Chinese experts will also help build one national demonstration village and 11 provincial demonstration villages for poverty eradication through vigorous development of hybrid rice.

But farmers could be benefitting from improved incomes from high-value buyers if they had better market links and access ...read full column here

With operations in every corner of the world, they produce as much as $1.5 trillion worth of food, fuel and timber every year ...read full column here

Claudia Castellanos is the Co-Founder and CEO of Black Mamba, an Eswatini-based brand that manufactures and distributes specialty food products such as chilli sauces, pestos, chutneys and jams among others … read full interview here.