The stars of hotel development in Africa are Egypt, Nigeria, Morocco and Ethiopia, according to the 11thannual survey by W Hospitality Group.

The four countries head the top ten by numbers of rooms in the internationally-branded hotel development pipeline, with Egypt showing 15,158 rooms in 51 new hotels.

A total of 75,155 branded rooms in 401 hotels are in development across the whole of Africa – a net increase (ignoring recent openings and taking in to account deals that have not come to fruition) of almost 11,000 rooms in the pipeline, 17% up on 2018.

The top-line figures show that in North Africa the rooms pipeline is up 2.3% on 2018, and down 3.8% in sub-Saharan Africa – largely due to several of the chains “cleaning” their pipelines, deleting deals that they believe are not going to happen. These cleaning adjustments amount to more than 12,000 rooms in 74 hotels.

Nevertheless, despite this significant adjustment, there has been growth of 51% in the total pipeline rooms since 2015 - North Africa up by 58%, and sub-Saharan Africa up by 47%.

This year, the top ten countries account for 69% of the total hotels in the survey, and 74% of the rooms.

Full details will be revealed and discussed at the Africa Hotel Investment Forum (AHIF) in Addis Ababa, September 23 – 25 2019, organised by Bench Events. It is the leading conference of its kind in Africa, connecting business leaders and fuelling investment in tourism projects, infrastructure and hotel development across the continent.

The country rankings in full 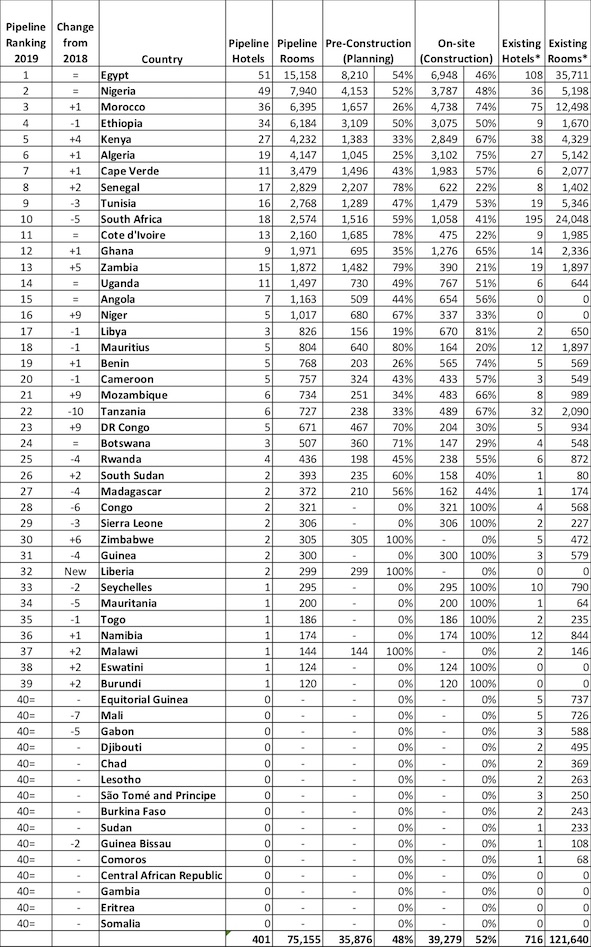 Trevor Ward, Managing Director, W Hospitality Group said: “Egypt has by far the largest number of rooms in the pipeline this year, almost double the number in Nigeria, which is in second place. There has been huge activity by the chains in Egypt, with over 2,000 new rooms signed there in 2017, and a further 4,500 in 2018, of which 1,850 were signed by Radisson. Accor has no fewer than 16 deals with 6,363 hotels in Egypt, boosted by new brands from its acquisitions, including Mövenpick and Fairmont.”

He continued: “It’s interesting that there has also been a lot of activity in some of Africa’s countries, such as Niger and Zambia.  In Niamey (Niger), where there is currently no branded hotel supply, there are no fewer than 5 hotels in the pipeline, and in Lusaka (Zambia), the chains signed 11 deals in 2018 and early 2019, taking the total pipeline there to 15 hotels with almost 1,900 rooms.”

The pipeline in Nigeria has fallen by 17 per cent compared with 2018, with a few openings, including Hilton’s first Curio Hotel in Africa, the Legend Hotel in Lagos. The drop is due predominantly to a “cleaning out” of 11 deals comprising 2,100 rooms, and a reduction in activity generally due to the economic downturn.

Ethiopia, in fourth place, has seen another increase in pipeline deals, up from 31 hotels in 2018, signed by international chains such as Accor and Hilton, as well as by regional chains such as aha and Latitude. Best Western and IHG each signed two hotels in 2018.  The majority of these deals, 27 hotels with 84 per cent of total rooms, are in Addis Ababa. In Trevor’s opinion, “They join a multitude of half-built unbranded hotels, leading to fears of oversupply. But the likelihood of all these deals delivering new hotels, branded and unbranded, is very low, reducing the capacity risk.”

As last year, four of the five North African countries are in the top 10 by number of planned rooms, with Morocco, in third place, recording an increase of 17.2 per cent on last year. There, 14 deals comprising 2,423 rooms were signed in 2018. These include Onomo’s portfolio deal with Cantor Hotel Group (six hotels with 740 rooms) and Six Senses’ first deals in Africa, as they develop a chain of Kasbahs. Unsurprisingly, owing to the political situation, there are no new deals being signed in Libya, where some previous projects have been cancelled.

Looking at the top ten cities, Cairo, with over 8,000 rooms in development and Addis Ababa, with over 5,000, have a clear lead. They are followed by Lagos (the leader for several previous years) and then Nairobi, Algiers, Abuja, Dakar, Abijan, Lusaka and Marrakech, the last two in the top ten for the first time. 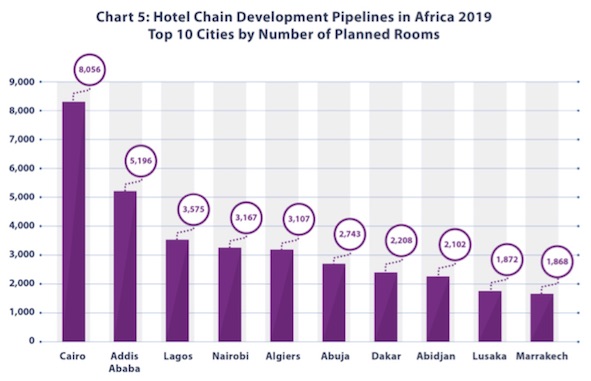 Egypt is not only the country with the most internationally-branded hotels in development, it also has the most internationally-branded properties already operated by the contributors, 108 hotels with 35,711 rooms between them. The countries which rank next, in terms of branded hotel rooms already operating are South Africa with 24,048, Morocco with 12,498 and then Tunisia, Nigeria and Algeria, all with just over 5,000. Kenya has over 4,000 branded rooms and it is followed by Ghana, Tanzania and Cape Verde, each with just over 2,000. At the other end of the list, there are four countries with no internationally-branded hotels and none in the development pipeline; they are Central African Republic, Eritrea, The Gambia and Somalia.

In the battle of the brands, Accor is the strongest pipeline player in Africa with more than 27,000 rooms spread across 162 hotels. It is followed by Marriott with over 23,000 rooms in 135 hotels. However, if both complete their current development pipelines with no further additions, they will stand neck and neck with just over 40,000 rooms each operating in Africa. Hilton is in third place, Radisson fourth and IHG fifth, after which, there is a substantial gap between the big five and other international chains. 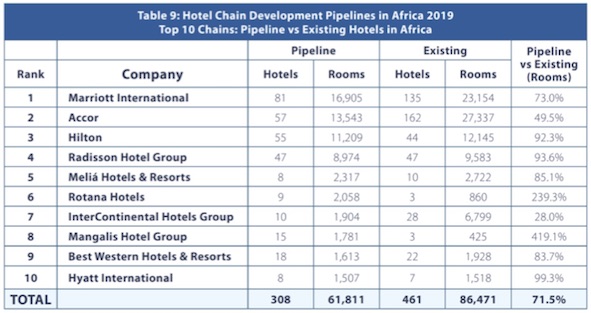 Jonathan Worsley, Chairman of Bench Events, which organises AHIF, said: “Every year, W Hospitality Group’s report gets bigger and better, reflecting the strong long-term investment in the industry. I am struck by the saying “to develop in Africa, you have to be in Africa”, and I note that the top four hotel chains in terms of rooms, i.e. Marriott, Accor, Hilton and Radisson, which represent almost 70 per cent of the total pipeline, all have well-resourced development offices on the continent.”